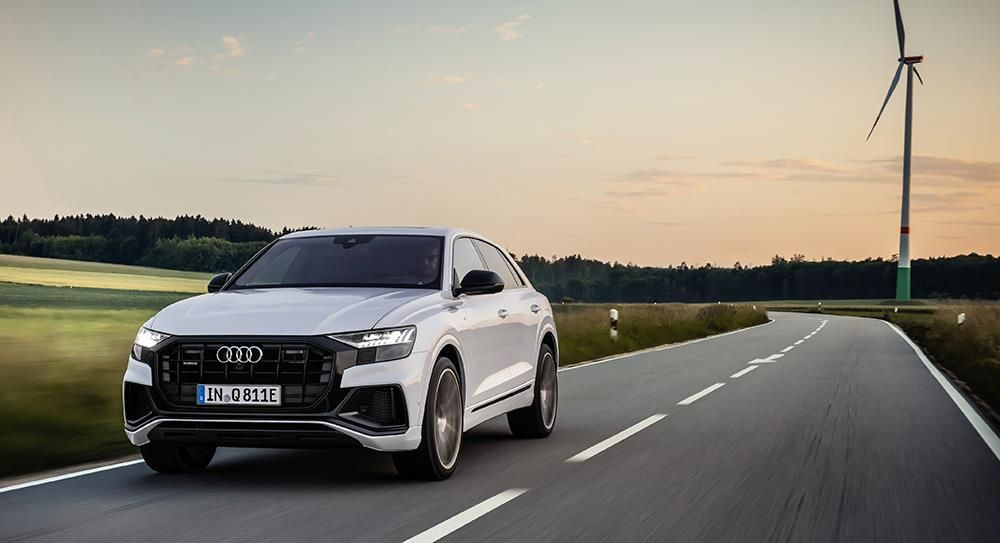 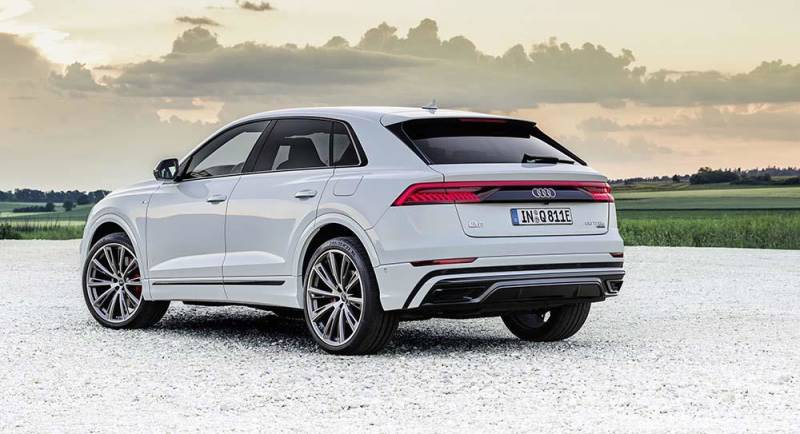 Luxury on a grand scale, consumption at its most modest – like its more familiar relatives the new Audi Q8 TFSI e quattro goes above and beyond to provide the most superlative driving experience in the Audi SUV range, but the brand’s seventh plug-in-hybrid also goes to even greater lengths to do so as environmentally sensitively as possible. The new version closes the last gap in the Q8 family and will be available in the UK in two forms - the Q8 55 TFSI e quattro with a system output of 381 PS and the Q8 Competition 60 TFSI e quattro with 462 PS. Both combine abundant V6 TFSI power with an electric motor that enables them to travel for up to 28 miles under electric power and therefore with zero local emissions.

“Luxury travel is obviously something to be savoured, but for an ever increasing number of drivers it can only be enjoyed with due consideration and respect for the environment,” says Director of Audi UK Andrew Doyle.

“Cruising on air suspension in the upscale surroundings of the new Q8 TFSI e accompanied only by the distant purr of its electric motor is a true golden moment, but also a green one that can be enjoyed for the entire duration of many commutes, eliminating exhaust emissions from numerous journeys. Factor in the V6 engine providing the luxury of abundant power and the convenience of a far-reaching driving range in hybrid mode and you have an SUV that really appeals on every level.”

The best of both worlds: a high-octane TFSI and a powerful electric motor Luxury is having ample performance in reserve, so the Q8 TFSI e quattro combines an EU6 AP-compliant 3.0 TFSI petrol engine delivering 340PS and peak torque of 450 Nm (331.9 lb-ft) with a permanently excited synchronous electric motor with a 100kW output which is compact enough to be integrated in the housing of the eight-speed Tiptronic transmission. Together with the coupling, which connects the 3.0 TFSI to the drivetrain, it forms what is known as the hybrid module.

The lithium-ion battery is installed under the luggage compartment and contains 104 latest generation pouch cells arranged in 13 modules. Each of these cells with flexible outer skin provides an electrical capacity of 48 Ah, and the battery system has an energy capacity of 17.8 kWh.

Liquid cooling, which forms its own low-temperature circuit, is an important factor for the energy capacity and performance of the battery. If necessary, it can be connected to the coolant circuit for the air conditioning system or coupled with the second low-temperature circuit, which controls the temperature of the electric engine and power electronics. It converts the direct current from the battery into three-phase current to power the electric motor. During recuperation, it feeds direct current back to the battery.

The conduit for the electric motor and the 3.0 TFSI is an eight-speed tiptronic that shifts quickly and comfortably. Its electric oil pump maintains supply even when the V6 petrol engine is deactivated. Power flows to the quattro permanent all-wheel drive system, which uses a centre differential with purely mechanical regulation that distributes 40 per cent of the torque to the front axle and 60 percent to the rear under normal operating conditions; if needed, it can direct the larger share of power to the axle with better traction. Up to 85 percent can be distributed to the front axle and up to 70 percent to the rear. 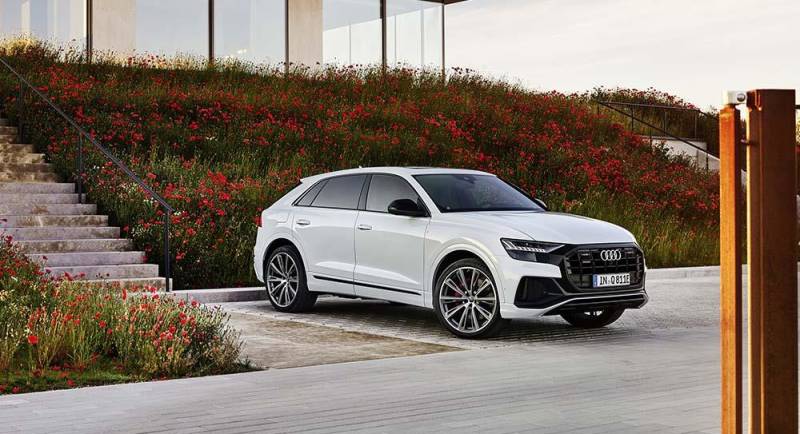 Audi offers the SUV Coupé in two output levels. Both versions can travel for up to 28 miles driven exclusively by their electric motors, according to the WLTP measurement procedure, and can reach speeds of up to 83mph without combustion engine intervention.

The Q8 Competition 60 TFSI e quattro delivers a total system output of 462PS and system torque of 700 Nm (516.3 lb-ft). Spurred on by both its V6 TFSI and its electric motor, it can accelerate from rest to 62mph in 5.4 seconds and reach an electronically governed top speed of 149mph. In hot pursuit is the Q8 55 TFSI e quattro with its 381PS system output and 600 Nm (442.5 lb-ft) of system torque. It can complete the 0-62mph sprint in 5.8 seconds and match its counterpart’s top speed. Equally importantly, the Q8 55 TFSI e quattro has the potential to return up to 100mpg with CO2 emissions of as little as 65 g/km, while the Q8 Competition 60 TFSI e quattro sacrifices little in return for its extra power and pace, combining scope for up to 97mpg with minimum CO2 output of 66g/km.

Intelligent and efficient: hybrid management and the predictive operating strategy

The optimum operating strategy for each journey is determined automatically in the Q8 TFSI e quattro models by their hybrid management system. The SUV Coupés start in fully electric “EV” mode, when at low speeds the legally prescribed warning sound (AVAS, Acoustic Vehicle Alerting System) can be heard by surrounding road users thanks to loudspeakers located in their right front wheel arches. The petrol engine is activated only when the driver presses the accelerator pedal beyond a specific level of resistance.

In “Auto” mode, the hybrid system selects the optimum drive type automatically: fully electric at low speeds, the TFSI engine at higher speeds, and often a combination of the two. To give maximum priority to electric power, an “EV” mode can also be selected in the central MMI display.

Information from the immediate environment provided by the MMI is taken into account even when navigation is deactivated. The predictive operating strategy is activated when route guidance is started in the standard MMI navigation plus. Its task is to calculate at which points in the driving route the battery’s charge can be deployed most intelligently and efficiently. In addition, the predictive operating strategy can charge the battery in phases where the engine is running particularly efficiently in order for electric power to be available during more demanding operating phases such as traffic jams or city traffic. On the basis of the large amount of data it uses for this purpose, it develops a long-distance journey plan that is constantly updated using the navigation, environmental, and online traffic data.

In “Hold” mode, the operating strategy pursues a different goal: It retains the battery’s existing state of charge at the current level for use at a later point. In “Charge” mode, the aim is to charge the battery as fully as possible while driving. This makes sense if a journey is due to end in an urban area because it enables the final miles to be covered under purely electric power.

Who brakes wins: up to 80 kW recuperation power

The predictive efficiency assist is another invaluable asset to the plug-in hybrid Q8 models. When the driver releases the accelerator pedal, it determines whether the car enters freewheeling mode with the TFSI engine deactivated (“coasting”) or whether it decelerates via the electric motor, recuperating energy for the battery. It can regain up to 25 kW of power just by coasting. In addition, the electric motor performs all brake applications up to 0.3 g – the vast majority in everyday driving. The hydraulic wheel brakes intervene virtually imperceptibly only when heavier braking is required. The Audi Q8 TFSI e quattro can harvest up to 80 kW of recuperation power while braking.

When the adaptive cruise assist system (optional as part of the Tour Pack and standard for Vorsprung versions) is activated, the predictive efficiency assist becomes active not only during deceleration but also during acceleration. If it is switched off, it sends a pulse through the accelerator pedal to prompt the driver to decelerate when doing so would boost efficiency and also issues alerts via the Audi virtual cockpit and the head-up display which is a standard feature of Vorsprung models.

Adaptive cruise assist is one of the highlights in the armoury of driver assistance systems the Q8 TFSI e quattro models can draw on. It can assist the driver with steering, accelerating and braking over long distances within the limits of what is currently legally permissible. In a recent vehicle safety test by Europe’s NCAP consortium focusing on level-2 systems of this kind, the Q8 achieved the top score.

Up to seven driving profiles: the Audi drive select system

The Audi drive select system is another very influential component in the Audi Q8 TFSI e quattro driving experience. It offers a choice of seven driving profiles: comfort, efficiency, auto, dynamic, individual, offroad and allroad, allowing the driver to tailor the characteristics of features including the 3.0 TFSI, the tiptronic transmission, the air suspension and power steering. Depending on the settings, the way in which the powertrain reacts also changes. For example, if the dynamic profile and the S mode of the tiptronic transmission are activated, the electric motor joins forces with the TFSI engine to provide a powerful additional boost as soon as the driver accelerates. When decelerating, freewheeling is unavailable in this mode, allowing the electric motor to always recuperate energy.

Extremely convenient: charging at home and on the road

The new Q8 TFSI e quattro models are equipped with charging cables for use with household three-pin plugs and AC wallboxes and at public charging points. With the maximum charging capacity of up to 7.4 kW, an empty battery can be fully charged in around two-and-a-half hours. With the myAudi app, the driver can remotely check the battery and range status, start charging processes, program the charging timer and view charging and consumption data.

The app can also be used to activate seat and steering wheel heating where this is fitted and to bring the cabin to a desired temperature before a journey begins.

Charging at public points is also facilitated by the myAudi app, which can pinpoint charging locations along a prescribed route and also highlight those that are available to holders of the e-tron charging service charge card, which is valid at numerous stations operated by a total of 18 UK suppliers and combines simple onetap charging with convenient one-invoice monthly billing.

Equipment befits the Q8’s positioning at the pinnacle of the Audi Q range, and naturally covers the full spectrum from supple valcona leather upholstery to HD Matrix LED lighting and adaptive air suspension Sport. The MMI touch response operating concept with its two high-resolution touch displays and haptic feedback is the technology hub for the lavishly trimmed cabin, enabling fingertip control of the infotainment, navigation and climate control systems and facilitating text input. As an alternative, the driver can deliver commands using the advanced natural language voice control, which processes all requests using either information stored onboard or sourced from the cloud. MMI navigation plus with MMI Touch is of course also standard and incorporates the Audi Virtual Cockpit with its 12.3-inch display, a Wi-Fi hotspot and the extensive Audi connect portfolio, opening up everything from online traffic information and Google Earth mapping to hybrid radio. The Audi Smartphone Interface and Audi Phone Box also form part of the technological specification to connect and inductively charge handsets.

The Competition 60 TFSI e quattro Vorsprung model takes luxury to the next level, with black styling detailing that shows the body and its S line sculpting in its best light, and powered soft-close doors that set the tone for the exceptional comfort and luxury within. Ventilated super sport seats with massage function, an Alcantara headlining, an extended leather pack and Bang & Olufsen audio are just a few of the fixtures that combine to create an exceptionally opulent feel, and the technology quota is also augmented by a head-up display and the integration of virtually every driver assistance aid available in the Q8 range. 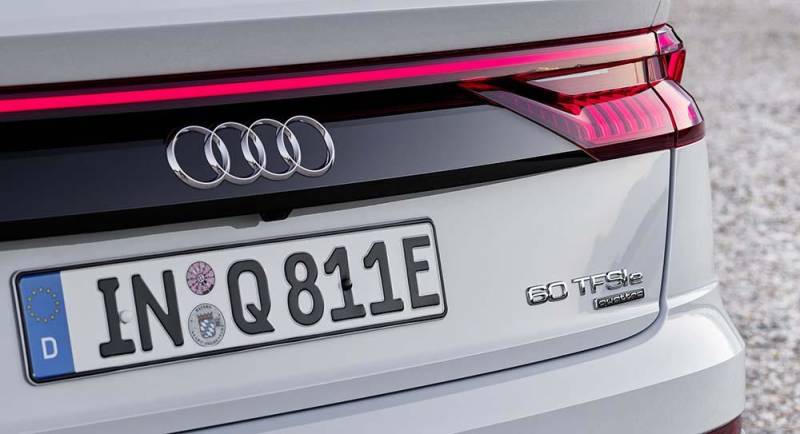 All-new Q5 Sportback: aesthetic appeal of a coupé and versatility of an SUV

We use cookies to ensure that we give you the best experience on our website and to improve the relevance of our communications with you. If you continue without changing your settings, we'll assume that you are happy to receive all cookies on our website. However, if you would like to, you can change your cookie settings at any time. You can find detailed information about how cookies are used on this website by clicking Find out more.