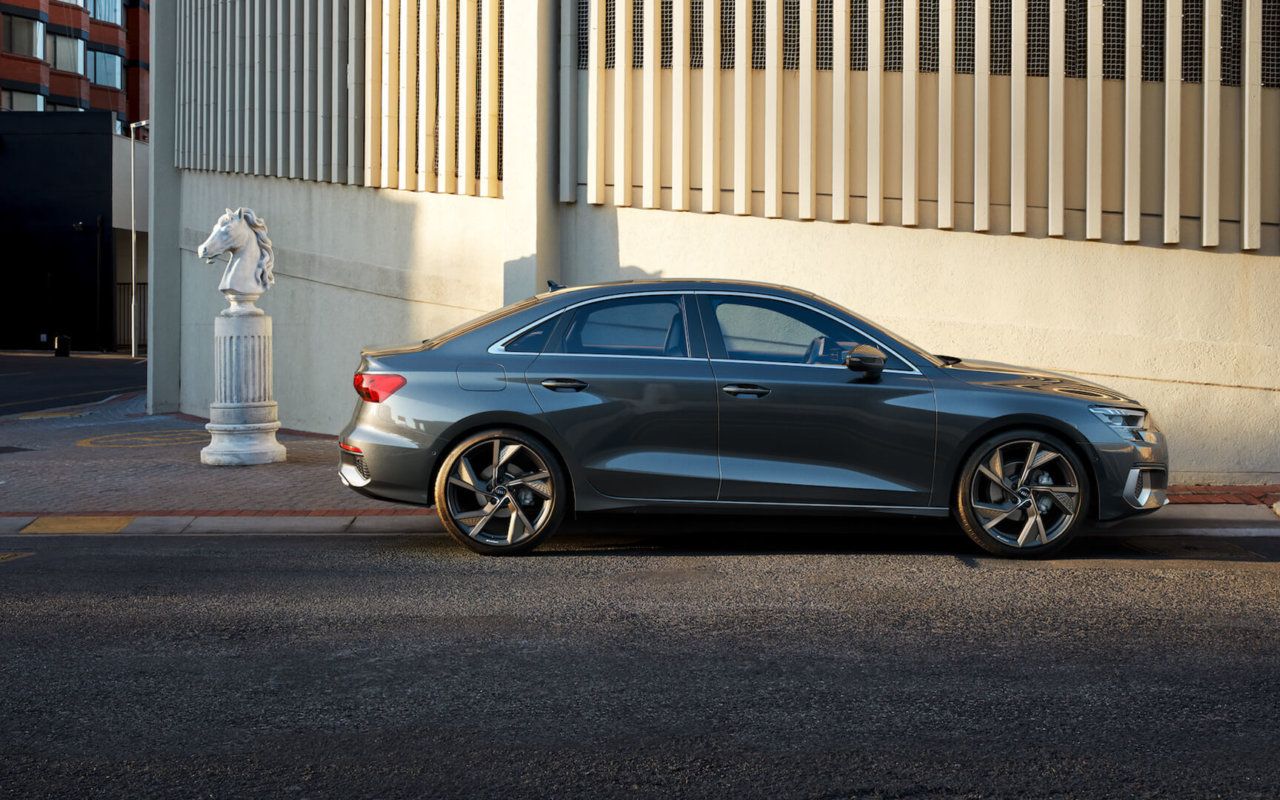 Reboot for a compact class favourite - the new A3 Saloon

All-new A3 Saloon is available to order in the UK from April. 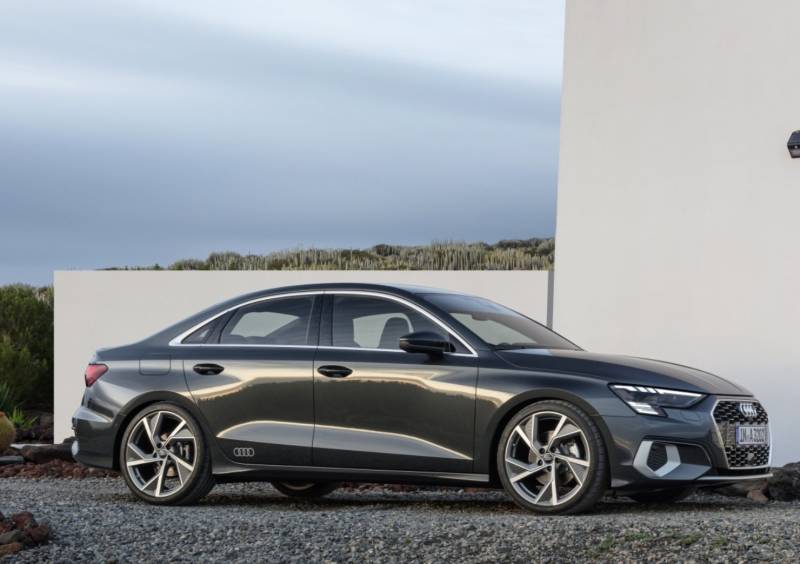 Beautifully balanced proportions and manageable dimensions combined with a quality of finish and a level of technological sophistication befitting cars from the classes above – these attractive attributes characterised the first generation of the Audi A3 Saloon and continue to be the cornerstones for its all-new successor, which is due to make its UK debut in the summer. Following these underlying principles, the compact four-door model has undergone a wholesale redesign alongside its five-door Sportback counterpart drawing on the very latest Audi developments in digitalisation, connectivity, driver assistance technology and powertrain optimisation. Highlights include the adoption of fully digital cockpit architecture with the touch-screen MMI Touch concept at its heart, the integration of mild hybrid MHEV drivetrains for selected models and the introduction of advanced new lighting configurations that give each variant a specific light ‘signature’.

“While the A3 Sportback has traditionally been the high achiever of the A3 family in the UK, the A3 Saloon has also been quietly carving out a very respectable niche for itself,” says Director of Audi UK Andrew Doyle. “The well-balanced design with its short overhangs and crisp lines has certainly won fans, as have the city-friendly proportions, and of course these are delivered with the same exceptional polish that has won so many plaudits in the Sportback. Fortunately, the second generation car takes its predecessor’s inherent strengths, builds on them convincingly and clothes 2/6 them in absolutely contemporary Audi design. It is now an even more credible partner to the Sportback that deserves to attract an even broader fan base.”

Compared with its predecessor, the new A3 Saloon is now four centimetres longer at 4.50 metres in length, while its wheelbase remains unchanged. Its width has increased by two centimetres to 1.82 metres and it is now one centimetre taller at 1.43 metres. This has helped to expand elbow room and has yielded an increase in headroom of 2 centimetres in the front, helped by the repositioned driver’s seat. At 425 litres, the luggage capacity is exactly the same as in the first-generation model. 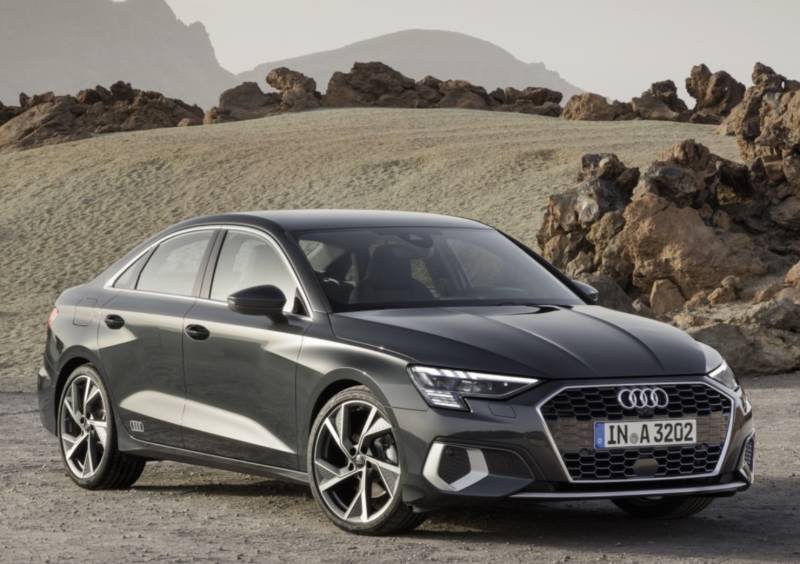 Powerful and elegant: The exterior

The focal point at the front of the new A3 Saloon is of course the large Singleframe with a honeycomb grille. It is flanked by striking trapezoidal LED headlight units in all versions, under which are LED daytime running lights with specific light ‘signatures’ which differ by model. A configuration using horizontal lines marks out the Sport variant while two vertical LED lines complement the even more focused look of the S line. The top tier Edition 1 and Vorsprung models upgrade to full Matrix LED units which, for the first time, incorporate new digital daytime running lights comprising 15 LED segments in a three-by-five arrangement. In addition, the matrix LED headlights offer intelligently controlled high beam light, dynamic turn signal light and dynamic light sequencing when the car is locked and unlocked.

In contrast with the A3 Sportback, in which the body line running above the sill rises slightly towards the rear lights before the rear wheel arch to accentuate the short rear end, the Saloon’s body line continues in a straight line up to the rear bumper. This emphasises its length – 15 centimetres longer than the Sportback – and makes for elegant proportions in profile. The concave surface under the broad body shoulder further accentuates the quattro blisters and the sill, while the roofline, which tapers down from the B-pillar and finishes in a striking spoiler on the tailgate, draws inspiration from classic coupé design. 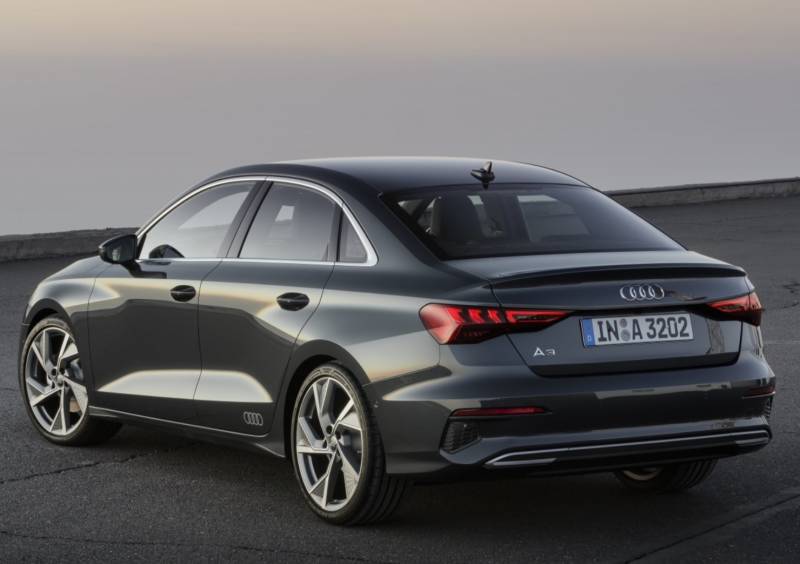 Focused and digitalised: The cockpit

The exterior of the new A3 Saloon projects an image of absolute modernity and technological acuity, and the cabin more than lives up to the expectations it creates. The high definition lines of the dashboard with its striking air vents, the attractively sculpted door handles and the new compact gear shifter with its much- reduced dimensions draw the eye initially until ignition brings to life the central 10.1-inch MMI Touch screen and the 10.25-inch fully digital cockpit display in the binnacle, both of which are subtly integrated using a black panel design. Inclined slightly towards the driver, the primary 10.1-inch touch-screen display gives access to all media, navigation and internet-based Audi connect functions and includes handwriting detection as well as natural language control that can optionally draw on the capabilities of the cloud. In Edition 1 and Vorsprung versions the 10.25-inch fully digital instrument cluster behind the steering wheel is upgraded to the Audi virtual cockpit plus with a wider 12.3-inch screen offering three different views, one of which presents RPM and speed as bar diagrams with angular red graphical elements. In the Vorsprung model, an additional head-up display perfectly complements the new digital concept, projecting important information onto the windscreen in the driver’s direct field of vision. 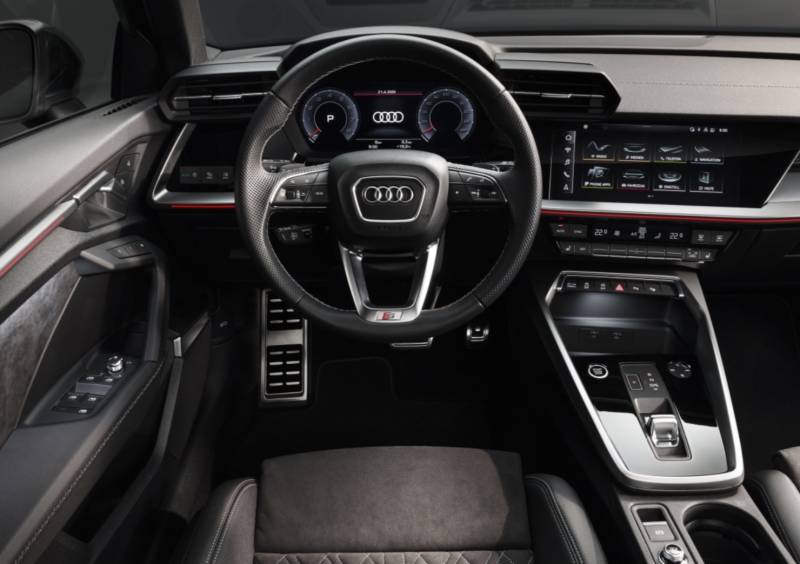 The third-generation modular infotainment platform (MIB 3) is the processing powerhouse behind the new A3 Saloon’s advanced MMI Navigation plus system, which is a standard feature of all UK models. MIB 3 provides ten times more computing power than the previous system and runs at LTE Advanced speeds. It provides passengers with internet access via a Wi-Fi hotspot and also makes a broad spread of web-based Audi connect services available as standard, including online 4/6 traffic information, news and additional information such as photos, opening times, and user reviews relating to points of interest.

Later this year, the Amazon Alexa voice assistant will also become available, opening up access to a wealth of additional information and also offering the opportunity for remote control of home devices while on the road.

Car-to-X services that make use of the swarm intelligence of the Audi fleet are also part of the portfolio. They enable reports of hazards or speed limits to be beamed to vehicles with the corresponding equipment, for example, or can locate available parking spaces. If the car is switched off and cannot access a destination directly, the myAudi app continues the navigation process on a smartphone to enable customers to complete their journey.

Smartphone connection is also possible via the standard Audi smartphone interface, which integrates iOS and Android phones with Apple Car Play and Android Auto in the MMI, as well as via the Audi phone box which is fitted as standard to Vorsprung versions. The latter connects the device to the car aerial and can charge it inductively. For additional convenience, the new A3 Saloon can also be locked and unlocked as well as started via an Android smartphone with the Audi connect key.

The smartphone interface joins the 10.1-inch touch display in the centre console, the Audi Virtual Cockpit in either 10.25-inch or higher functioning 12.3-inch forms, MMI Navigation Plus and Audi Connect Plus on the standard equipment highlights list for all A3 Saloon models. Sport-specific styling details inside and out mark out the lead-in model, which also offers features including 17-inch alloy wheels, Twin leather upholstery and dual-zone climate control.

Further, still up the specification rungs, the newly introduced Edition 1 option brings features such as 19-inch alloy wheels, black exterior styling, Matrix LED headlamps with digital daytime running lights and electrically adjustable and heated front sport 5/6 seats upholstered in a combination of Alcantara and leatherette. On the top tier, the A3 Saloon Vorsprung takes this already lavish specification and augments it with indulgences including a panoramic glass sunroof, Fine Nappa leather upholstery, the Audi Phone Box and Bang & Olufsen audio.

Headline features from a driver assistance perspective that are fitted across the board also include Audi pre sense front, combining a camera behind the interior mirror with frontal radar to prevent or mitigate accidents, collision avoidance assist and lane departure warning. To these, the A3 Saloon Vorsprung adds virtually every other assistance feature available on the options list for models which sit beneath it, including the head-up display, traffic sign recognition, parking assist and adaptive cruise assist, an innovation from the full-size class that supports drivers with longitudinal and lateral guidance. 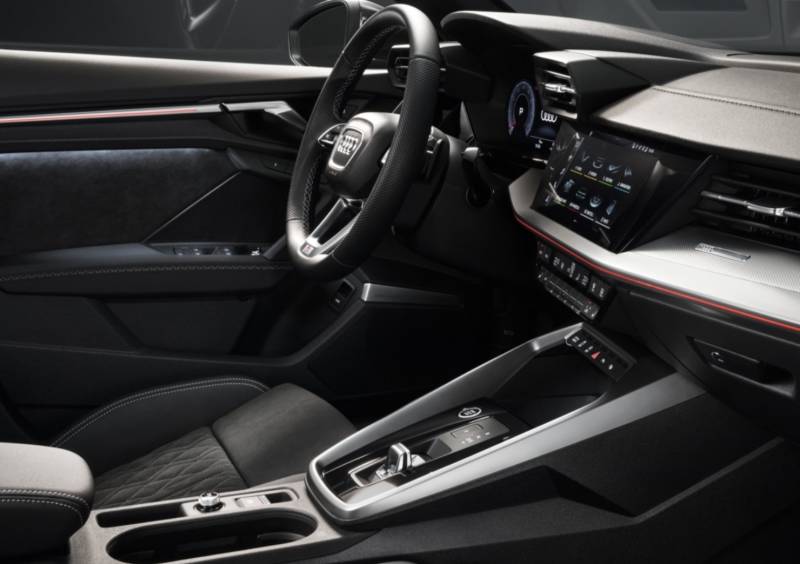 The new A3 Saloon is available with a choice of three engines at launch - two 1.5- litre TFSI units and one 2.0-litre TDI – all of which major on efficiency. The 35 TFSI, a 1.5-litre direct injection engine, incorporates cylinder-on-demand technology and delivers 150PS. In conjunction with a newly developed six-speed manual transmission, it is capable of returning up to 48.7 MPG with a CO2 output of 132g/km in an A3 Saloon equipped to Sport specification, according to WLTP test data.

The second version of this unit is used in combination with the quick-shifting seven-speed S tronic, which now performs its changes via a new switch using shift-by-wire technology.

This 1.5-litre TFSI combines cylinder-on-demand efficiency with a 48-volt mild-hybrid system capable of recovering energy during deceleration, supporting the engine with up to 50 Nm of additional torque under acceleration from low engine speeds and allowing the A3 Saloon to coast with the engine switched off in many situations. The fuel savings it affords help to increase the WLTP-ratified economy potential of the A3 Saloon 35 TFSI Sport S tronic to up to 50.4 MPG while paring back CO2 to 128g/km, despite an identical power output to the ‘standard’ 1.5 TFSI. In a similar vein, a 1.0 TFSI three-cylinder engine with 110PS will be included in the 6/6 next phase of engine introductions and will be available with either manual transmission or as a 48-volt mild-hybrid version with S tronic dual-clutch transmission.

The 2.0 TDI with 150PS in the A3 Saloon 35 TDI also works in conjunction with a seven-speed S tronic, and offers the potential to return up to 62.8 MPG with CO2 emissions of 119g/km. Later in the launch cycle, a 116PS version of the four-cylinder TDI linked to the highly efficient new six-speed manual transmission will power a 30 TDI version of the A3 Saloon. 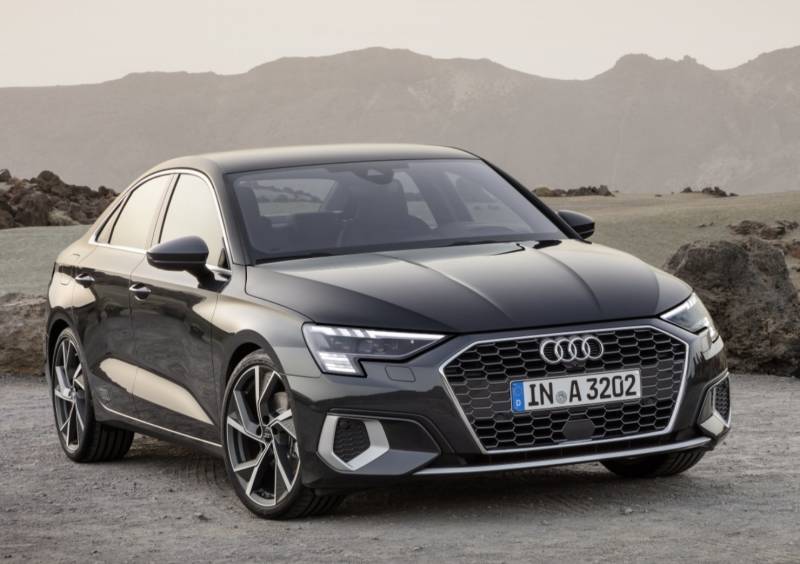 Comfortable and capable: The suspension

The suspension of the new A3 Saloon has been tuned to strike an even more finely judged balance between precision, response, adjustability and absorbency. Its even more positive feel and faster reaction speeds are due in no small part to the central dynamic handling system that ensures optimal interaction between all the components contributing to transverse dynamics. This applies as much to the standard set-up offered by Sport models as to the newly configured sport suspension that is a feature of S line models and above.

The standard Audi drive selects dynamic handling system also influences the driving characteristics of the new A3 Saloon by enabling the driver to modulate elements such as throttle response, steering weighting and S tronic shift points.

In the UK the first versions of the new A3 Saloon will become available to order in late April with prices starting from £26,870 OTR for the 35 TFSI Sport with a manual transmission, rising to £32,220 for the 35 TDI S line S tronic. Deliveries will begin in the summer.