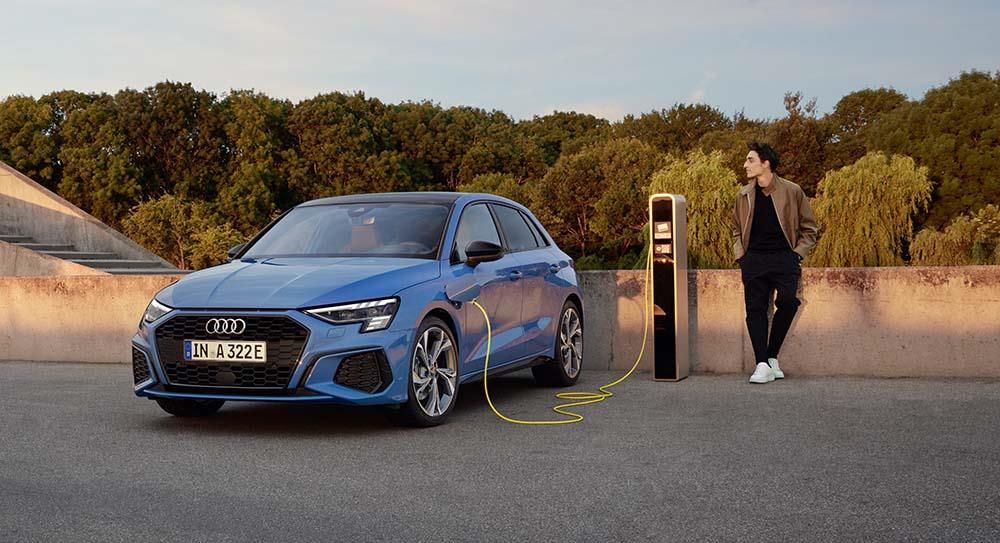 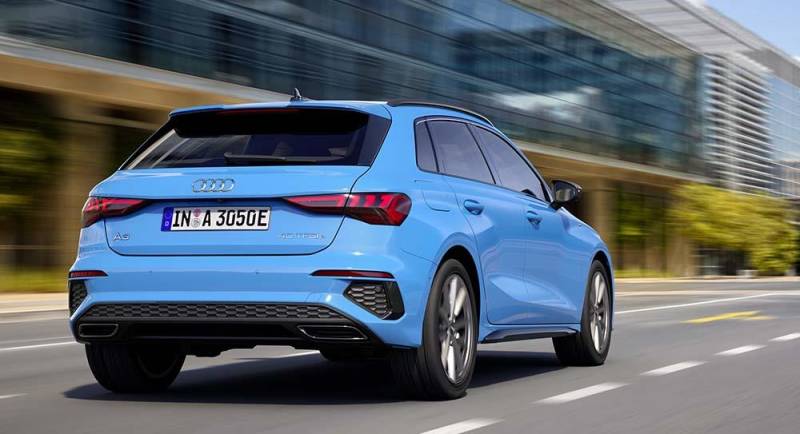 A little 'e' goes a long way in the latest Audi A3 Sportback – it means that this new TFSI e-version of the high-tech compact hatchback can travel effortlessly, economically and environmentally soundly under purely electric power for up to 41 miles, and then for hundreds more when its powerful and frugal TFSI engine takes up the task. The new Audi A3 Sportback 40 TFSI e plug-in hybrid will be available to order in the UK later this week in Sport or S line specification with prices starting from £33,060 OTR and will reach its first customers here towards the end of the year.

"Compact hatchbacks are of course particularly well suited to urban environments, as are electric vehicles, so combining the two formats in a state-of-the-art package displaying all the essential Audi hallmarks naturally creates an attractive proposition for daily commuting and city driving,“ says the Director of Audi UK Andrew Doyle. "The beauty of the new A3 Sportback TFSI e is that it can also reach the city limits well before it reaches its own – it can travel far further afield impressively efficiently and then be refueled and recharged quickly and conveniently. It’s a consummate allrounder.“

With the A3 Sportback 40 TFSI e, Audi is continuing its electrification offensive, which has already brought plug-in hybrid versions of the A6, A7, A8, Q5, and Q7 models to market. Now, the compact models are following suit. The A3 Sportback 40 TFSI e brings the concept first employed in its successful predecessor, the A3 Sportback e-tron, right up to date, and it will be followed in the near future by a more powerful variant with an even greater emphasis on performance. 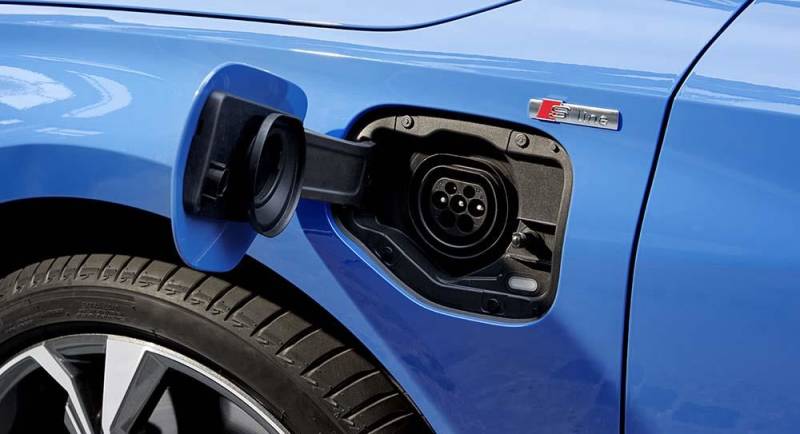 A 1.4 TFSI serves as the combustion engine for the compact plug-in hybrid model. The four-cylinder petrol engine offers a peak power of 150PS and makes more than 250 Nm (184.4 lb-ft) of torque available in the range between 1,550 and 3,500 rpm. It works with a permanently excited synchronous electric motor which is lighter and more compact than its predecessor and has a greater power density. It produces 80 kW and 330 Nm (243.4 lb-ft) of torque, and as before is integrated into the housing of the six-speed S tronic transmission.

Together, the 1.4 TFSI and the electric motor deliver a system output of 204PS. When they join forces to deliver maximum boost, system torque reaches 350 Nm (258.1 lb-ft). The compact plug-in hybrid model sprints from rest to 62mph in 7.6 seconds on its way to a top speed of 141mph. In the WLTP test cycle, it proves capable of returning up to 282.5 mpg with a CO2 output of no more than 31g/km. A six-speed S tronic transfers the output from the engine and motor to the front axle. The dual-clutch transmission is equipped with an electric oil pump that maintains oil supply and enables gear changes to continue even when the TFSI is deactivated temporarily.

The lithium-ion battery is located below the vehicle underbody in the area of the rear seats of the A3 Sportback 40 TFSI e. Its 96 prismatic cells store 13.0 kWh of energy, around 48 per cent more than the installation in the A3 Sportback e-tron due to improved cell chemistry. A separate cooling circuit controls the temperature of the battery. It can also be coupled with the air conditioning system, if necessary. This allows customers to drive on electric power even at higher outside temperatures. 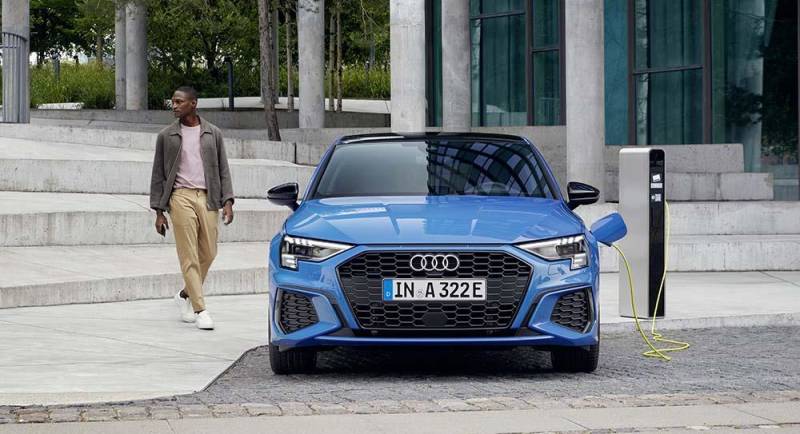 Optimal efficiency is always the target for the drive management system, which is supplied with a large volume of data by the navigation and assistance systems and the network of vehicle sensors. The new A3 Sportback 40 TFSI e always starts electrically, up to a temperature of -28 °C, and if required the driver can then ensure 3/6 that electric drive is always prioritised throughout the journey using the EV button. WLTP test data confirms that up to 41 miles can be covered using the electric motor alone, meaning that the majority of everyday journeys can be completed with zero local emissions.

Fully electric travel is possible at speeds of up to 87mph, while at the other end of the scale the statutory e-sound of what is known as the Acoustic Vehicle Alert System is emitted at low speeds to warn surrounding pedestrians and other road users that the vehicle is approaching.

When the A3 PHEV is in hybrid mode, the two power sources divide the work intelligently. In the interest of efficiency, the drive management system selects freewheeling with deactivated TFSI in most situations when decelerating, allowing the car to coast. Two special modes can be selected via the MMI operating system: “Battery hold” and “Battery charge.” In “hold” mode, the available battery charge is held at the current level. In “charge” mode, as much electricity as possible is supplied to the battery. 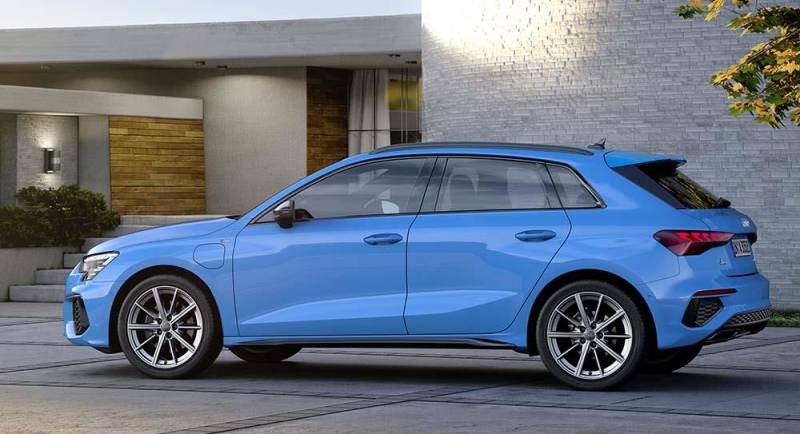 To influence how the drive system and other features such as the power steering and S tronic operate in the new A3 Sportback 40 TFSI e, the driver can also use Audi drive select, which is a standard feature and offers selectable Comfort, Auto, Dynamic, and Individual profiles. If the S tronic is set to S gear in the Dynamic mode, the hybrid drive exerts its maximum force on kick down, releasing the full boost torque for up to ten seconds. As soon as pressure on the accelerator pedal eases, the electric motor automatically switches to recuperation. The resulting deceleration creates a true one-pedal feeling.

While braking, the electric motor performs the deceleration alone up to around 0.3 g, which is sufficient to take care of the vast majority of braking applications in everyday driving. The hydraulic wheel brakes only come into play if the driver presses the pedal more forcefully. The transition is virtually imperceptible, and recuperation remains active. While braking, the electric motor can recover up to 40 kW of energy.

Sport and S line versions of the A3 Sportback 40 TFSI e are factory fitted with 17- inch and 18-inch alloy wheels respectively, but as wheel size can bring about minor variations in the compact hatchback’s electric-only driving range customers have the option to go up or down in size depending on their preferences. Thus the S line can be fitted with a 17-inch wheel as a no-cost option so business users can still qualify for the six percent BIK banding, The wheels are carefully controlled by a sophisticated multi-link suspension system combining refined ride comfort that complements the plug-in hybrid’s hushed electric-only cruising with excellent stability and composure for occasions when the full 204PS output is put to good use on more challenging roads. 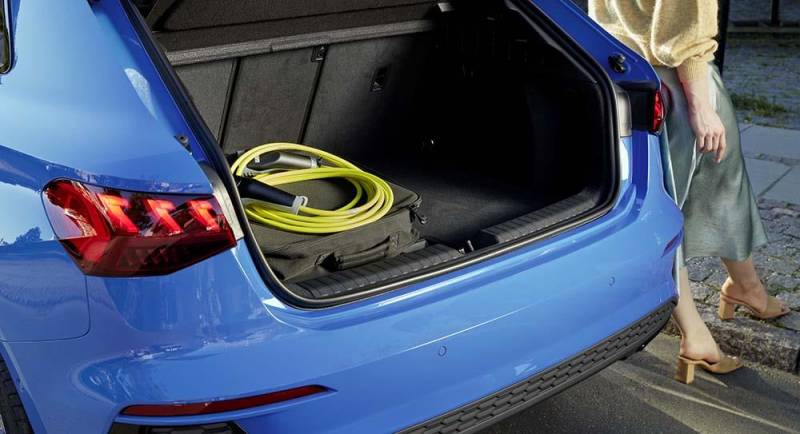 Charging at home and on the road: a full charge from a conventional socket in just four hours

When the time comes to charge the new A3 Sportback 40 TFSI e it can be plugged into a domestic AC wall box using the Type 2 cable supplied. A full recharge of a completely empty battery takes a little more than four hours, and the driver can decide when this takes place by using the myAudi app to define activation and deactivation times, meaning that cheaper off-peak electricity supply periods can be factored in. The app can also be used to remotely activate and modulate the climate control via a smartphone or tablet so that the driver can return to a car that is not only fully charged but also perfectly temperate inside. When outside temperatures are low, electric heating elements warm up the interior, while the electrically powered air conditioning cools the interior down when outside temperatures are high.

Charging is of course also possible at public charging points, and the myAudi app can also help here by pinpointing their location across the country and also facilitating their usage by highlighting those that are available to subscribers to the e-tron charging service. The service enables owners of Audi e-tron and TFSI e models to activate and pay for charging at numerous public charging points operated by a total of 18 suppliers across the UK using one RFID payment card that pools all costs incurred into one simple monthly invoice.

With its concave flanks, heavily slanted C-pillars, pronounced shoulder line, and accentuated quattro blisters the A3 Sportback 40 TFSI e has an athletic stance, particularly in S line form with its exclusive styling treatment. LED headlamps to flank the wide, hexagonal Singleframe in both versions, and can be optionally upgraded to Matrix LED units. Their digital daytime running lights, a pixel array consisting of 15 LED segments, generate an e-shaped light signature – the symbol of the plug-in hybrid drive.

The interior with its crisply defined dashboard, striking air vents, attractively sculpted door handles and new compact gear shifter has the same purposeful air. It seats five comfortably while providing up to 280 litres of capacity for their luggage. To access the compartment, an electric tailgate that can be opened and closed easily with a foot motion is available as an option. When the rear seats aren’t required, capacity can be increased to 1,100 litres by folding the seatbacks.

The cabin design neatly and discreetly integrates a central 10.1-inch MMI Touch screen and 10.25-inch fully digital Audi virtual cockpit. The primary 10.1-inch touchscreen display gives access to all media, navigation and internet-based Audi connect functions and includes handwriting detection as well as natural language voice control. The TFSI e models also display information on the energy flow between the various components of the hybrid system. In addition to its wide range of functions, the Audi virtual cockpit in the TFSI e models also features a power meter that displays the system’s output, the drive system status, the recuperation activity, the battery’s state of charge, and the range. 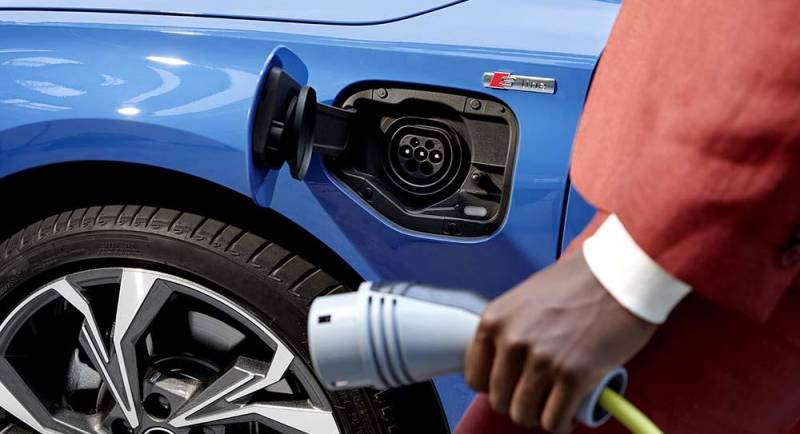 Intelligent and versatile: connectivity and equipment

Like all new A3 models, the compact plug-in hybrid is equipped with the third generation modular infotainment platform delivering ten times more computing power than its predecessor.

MMI navigation plus offering flexible and intelligent route guidance with satellite images from Google Earth and predictions on the development of the traffic situation is standard, as is Audi connect, which performs all its connectivity tasks at LTE Advanced speed and includes an integrated Wi-Fi hotspot. A connection between the car and the user’s smartphone is easy to establish via the standard Audi smartphone interface and myAudi app, and the optional Audi Phone Box can link the device to the vehicle aerial and charge it inductively.

Audi connect makes a broad spread of web-based services available, including online traffic information, news, weather, and additional resources such as local fuel pricing, opening times, and user reviews relating to points of interest. In the longer term, it will also be able to make use of the swarm intelligence of the Audi fleet to provide Car-to-X features such as lane-by-lane information on traffic flow, alerts for upcoming hazards such as slippery roads and fog, and an assistant that will make it easier to find an on-street parking space in selected cities.

New option highlights include a panoramic glass sunroof, and Ambient Lighting Pack offering a choice of 30 interior lighting colours adjustable via Audi drive select and a Comfort and Sound Pack bringing on board upgraded Bang & Olufsen audio, and enhanced parking system and front seat heating. In the driver aids section, the adaptive cruise assist system is also a stand-out – it assists the driver in many situations with steering, accelerating, and braking within the limits of what is currently legally permissible, and is available as part of the Driving Assistance Pack. 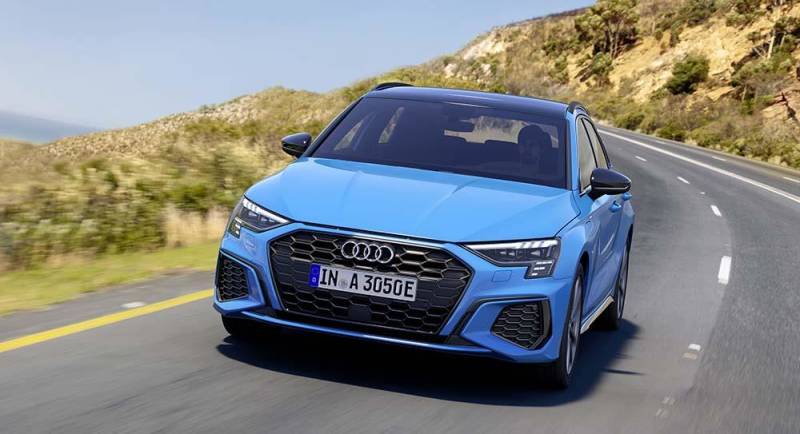