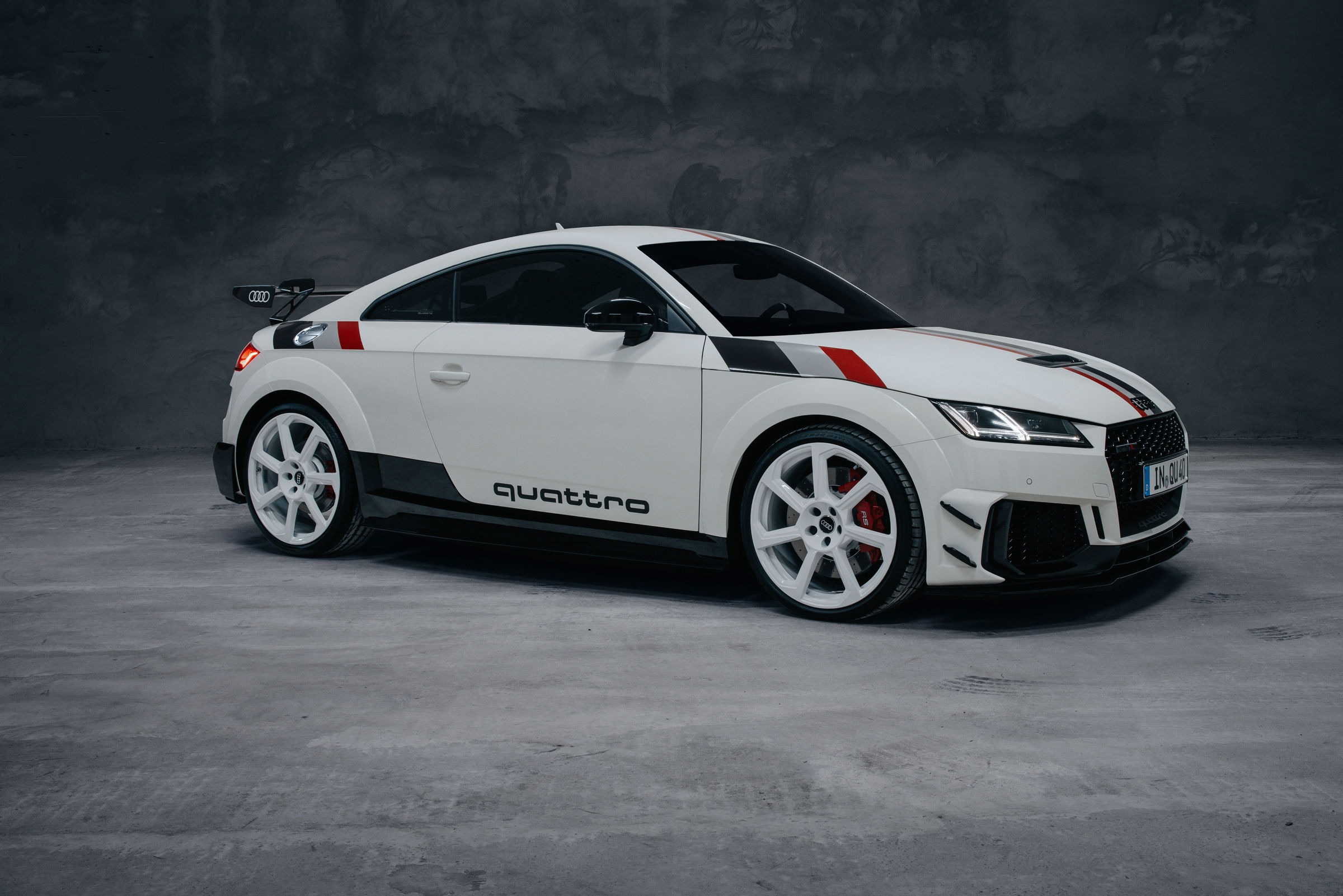 “For 40 years, quattro has been one of the main technology pillars of the brand with the four rings,” says Julius Seebach, Managing Director of Audi Sport GmbH. “Our RS models have always transferred their power onto the road via four wheels as standard. With the special edition of the TT RS limited to 40 units we intend to present our fans in Germany with a really special anniversary gift.”

The TT RS 40 years of quattro draws on the power of the 2.5 TFSI engine from Audi Sport. The five-cylinder engine, which has won the “International Engine of the Year Award” nine years running, produces 294 kW (400 PS) and develops a maximum torque of 480 Nm (354.0 lb-ft). The quattro permanent all-wheel drive distributes the power as required between the front and rear axles using a multi-plate clutch. Wheel-selective torque control makes handling even more agile and safer. It gently brakes the wheels on the inside of the curve when cornering at speed while increasing the drive torque to the wheels on the outside of the curve. The driver can influence the quattro drive and other components such as steering, seven-speed S tronic, exhaust flaps, and engine characteristics using the Audi drive select dynamic handling system.

The top speed of the TT RS 40 years of quattro is raised to 174mph as standard. The sport compacts sprints from 0 to 62 mph in only 3.7 seconds.  The beat of the background music is set by the characteristic five-cylinder firing sequence: 1-2-4-5-3. Firing alternates between directly adjacent cylinders and those far apart from one another. 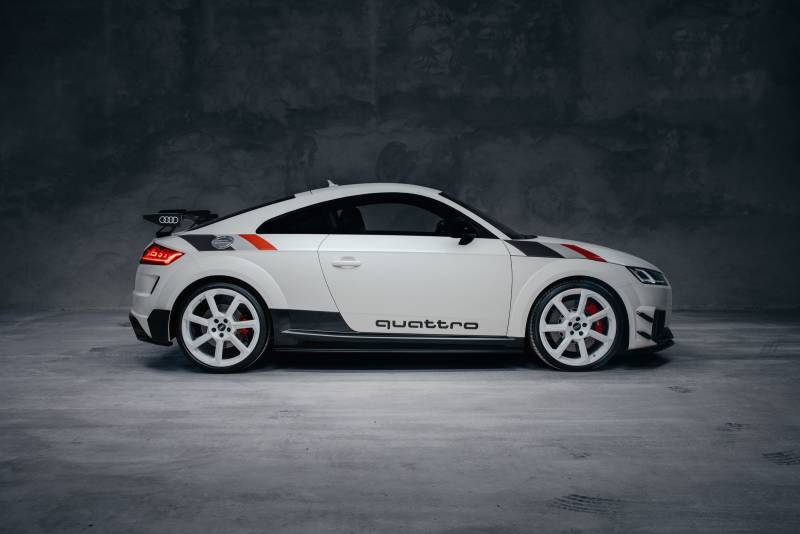 The Audi TT RS 40 years of quattro painted in Alpine white self-confidently shows off its motorsport heritage. The decals on the hood, shoulders, roof and rear is reminiscent of the livery of the specially modified Audi Sport quattro S1 that Walter Röhrl drove to victory in 1987 in the legendary Pikes Peak race in the United States.

The hood with a central air vent in gloss carbon adds another visual highlight while facilitating engine compartment ventilation – the opening allows the accumulated heat to escape even faster. The Aero kit developed in the wind tunnel enhances performance and handling on fast bends and significantly improves the compact sports car’s aerodynamics. The kit consists of side flics in gloss black on the front apron and a front splitter. The side sill trims transition to the striking rear with its fixed-wing, spoiler side sections, and diffuser. The aerodynamic measures result in a perfectly balanced complete package with only around nine kilograms (19.8 lb) of uplift at the front axle and around five kilograms (11.0 lb) of downforce at the rear axle at maximum speed. The relationship between aerodynamic drag and uplift is ideally balanced. This interaction was explicitly considered during development in the wind tunnel.

Large quattro letters on the doors make the essence of the special model abundantly clear. The partially matt rear quarter windows also feature the “40 years of quattro” logo. The side sills are painted black, the side sill inserts and the housings of the exterior mirrors, the blade, and the Audi rings are finished in gloss black. At the front axle, ventilated and perforated steel discs with red-painted brake calipers are in action behind the white-painted 20-inch alloy wheels.

The interior of the new TT RS 40 years of quattro with its cockpit focused squarely on the driver features numerous upgrades. The sporty character of the 2+2-seater comes across even more clearly as a result. As an option, customers can replace the rear bench with a strut cross brace made of carbon-reducing weight by around 16 kilograms (35.3 lb) and improve torsional rigidity. All of which brings the special model even closer to motorsport – with an even more intense driving sound.

Black Alcantara is used on the door trims and on the RS sport leather steering wheel with 12 o’clock marker in white. Black leather with white contrasting stitching adorns the center armrest, the door armrests and the center console. Heritage stripes on the Alpine white inlay tie in with the decals on the exterior. The floor mats in black with white piping and contrasting stitching are finished off with an embroidered RS. The RS sport seats in black fine Nappa leather with a seat center panel in black Alcantara and honeycomb pattern in white feature an exclusive embroidered “40 years of quattro” at shoulder level. A consecutively numbered badge on the S tronic selector lever makes each of the 40 units unique. 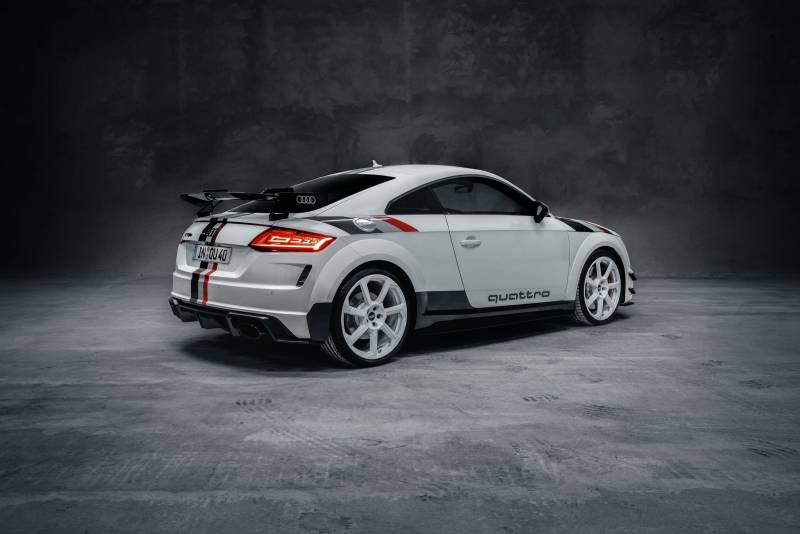