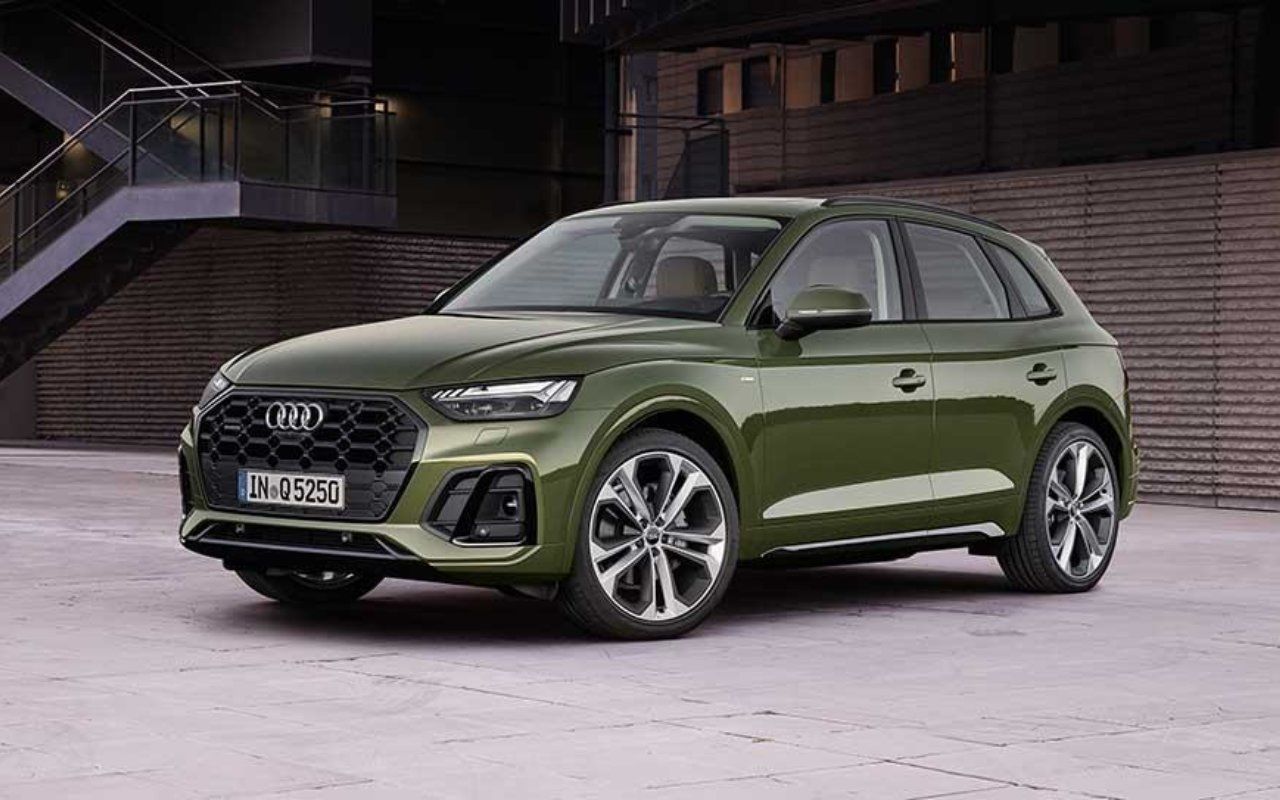 The Audi Q5 is adapting to the fast-changing digital landscape by venturing into the new technological territory – the successful midsize SUV has been extensively updated inside and out.

Highlights include the latest Audi touch-screen MMI Touch control in the cabin and new next-generation digital OLED exterior lighting for top-tier versions, as a first in the automotive sector.

The new-look Q5 is expected to arrive in the UK in the autumn. It will initially be available here with the familiar Sport, S line and Vorsprung specification options, and also in exclusive Edition 1 form for the first time.

While the width and height of the midsize SUV remain as before at 1.89 metres and 1.66 metres respectively, it is now 19 millimetres longer at 4.8 metres, primarily due to its new, larger bumpers.

Its octagonal Singleframe is shallower and appears wider than before, and the air intakes that flank it has grown in height and are now structured by trapezoidal insets. In S line, Edition 1 and top-tier Vorsprung models, it also has a honeycomb design. 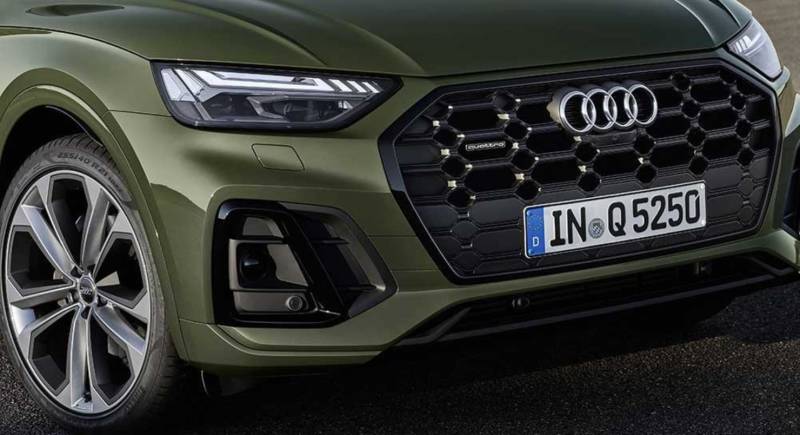 The upper sections of the LED headlamps, which replace the Xenon units as part of the entry-level Sport specification, feature a new signature for their daytime running lights, while in S line and Edition 1 models distinctively designed Matrix LED headlamps previously reserved for Vorsprung versions are now standard.

In profile, the latest Q5 has a more streamlined look thanks largely to its redesigned sill insert, and the air is carried through to the rear with the help of a new chrome trim element running between the light clusters and a new diffuser insert finished in either Selenite silver, matt brushed aluminium or Titanium black depending on the model.

In keeping with the structure elsewhere in the Audi range, the S line specification brings privacy glass and an exclusive design for the front and rear bumpers and side skirts, and these elements also form the basis for the look of the new Edition 1 version.

By upsizing to an exclusive matt black, diamond-cut 20-inch Audi Sport alloy wheel and adding a black styling pack that gives a lustrous Titanium black or High gloss black finish to everything from the window and grille surrounds to the door mirror housings and the Audi rings, the Edition 1 delivers much of the visual appeal of the Vorsprung model at a price point that is closer to the mid-range S line.

It is available in a choice of glacier white or mythos black paint finishes, or in the new shades district green and ultra blue.

Naturally, the visual impact remains strongest in the Vorsprung version, thanks to its larger 21-inch diamond-cut Audi Sport alloy wheels in gloss anthracite black, its running boards and its new taillights, which employ next-generation OLED technology as a world first in the automotive sector. Exclusive to this version in the UK, the lights are equipped with extremely efficient organic light-emitting diodes (OLEDs) that generate a homogenous light surface. Each is split into three tiles of six segments each, which enables Audi designers and developers to create different light designs and signatures from a single item of hardware. 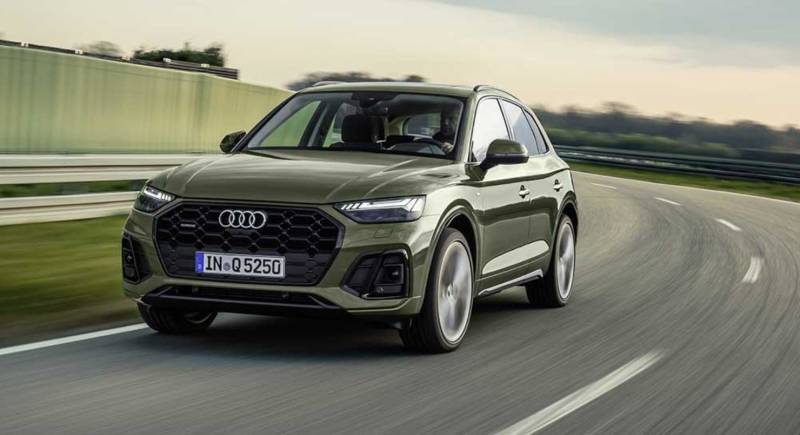 Customers opting for the Q5 Vorsprung will be able to choose from three light signature designs for the OLED rear lamps at the point of order, each also featuring a different configuration for its coming and leaving home sequence. All three options include another feature that is exclusive to the OLED units – proximity sensors illuminate all the OLED segments if another road user is detected within a two-metre radius of a stationary Q5. When the Q5 starts to move, its original light signature is reinstated.

Inside, the expansive sweep of the two-section dashboard bisected by its sculpted trim inlay will be familiar to Q5 drivers, as will the freestanding MMI display.

Closer inspection will reveal that the monitor itself is now larger, measuring 10.1 inches diagonally across the range, versus either seven inches or 8.3 inches depending on the specification in the outgoing model, and that the rotary controller in the centre console which originally acted as the gateway to the MMI functions displayed on the screen is now absent, replaced by a storage compartment. 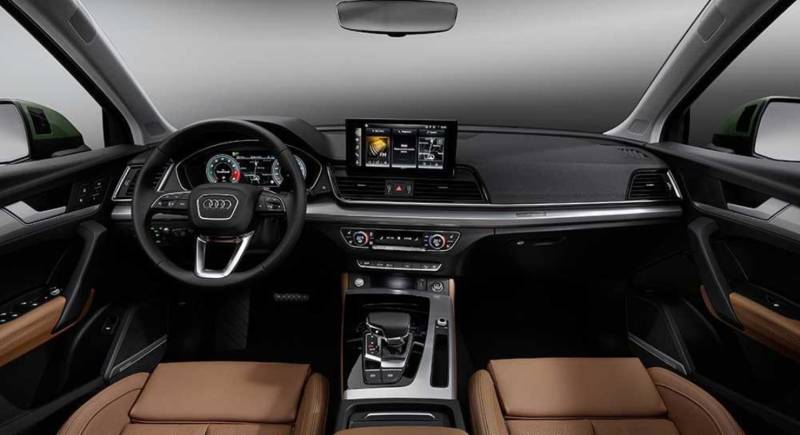 With the help of the third-generation Modular Infotainment Platform (MIB 3), a powerful new processor offering ten times more computing power than its predecessor, infotainment functions are now literally at the driver’s fingertips via the central touch-screen MMI Touch display, which gives acoustic feedback to acknowledge commands entered manually and can also process a vast array of everyday instructions given verbally.

In conjunction with MMI navigation plus, which was previously exclusive to Vorsprung versions but is now fitted as standard to all three trim lines, the voice-control system can also access the cloud to optimise its scope for comprehension of spoken instructions.

The richly detailed navigation mapping delivered by MMI navigation plus appears on the freestanding central screen and also extends for the full length of the 12.3-inch fully digital Audi Virtual Cockpit display directly ahead of the driver, which in the UK is another previously Vorsprung-specific feature that now becomes standard throughout the range.

In the latest model, it appears as the Audi Virtual Cockpit plus featuring two additional display options selectable by the driver via the MMI. Also common to all versions is the Audi Smartphone Interface, which enables the central screen to be given over to the user’s smartphone display and to provide direct access to many of the handset‘s key apps.

Audi connect is part and parcel of the MMI navigation plus package, meaning that all versions of the latest Q5 can network closely with the internet and traffic infrastructure, and can display high-resolution satellite images from Google Earth, lane-by-lane information on traffic flow and traffic forecasts in real-time. Internet connectivity also brings on board over 80,000 additional ‘skills’ offered by Amazon’s cloud-based Alexa voice control system, enabling the driver to ask Alexa to place an order from the car, stream a favourite playlist or audiobook or control a smart device at home while on the move.

Travellers in the updated Q5 can enjoy its technological gains from the comfort of front sport seats upholstered in Twin Leather in the lead-in Sport model, Alcantara and leather in the S line variant or diamond-stitched Fine Nappa leather in Edition 1 and top-flight Vorsprung. 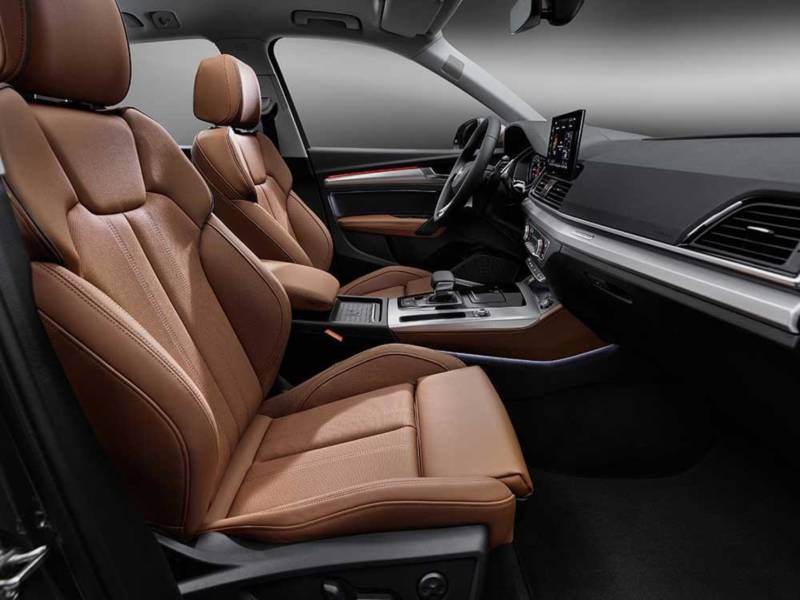 As befits their status the Vorsprung models also feature an extended upholstery pack which takes in the lower section of the centre console and the door armrests, plus full electric adjustment and a massage function for the front seats. The outer rear seats are also upgraded with heating to match the front seats which are heated throughout the range. 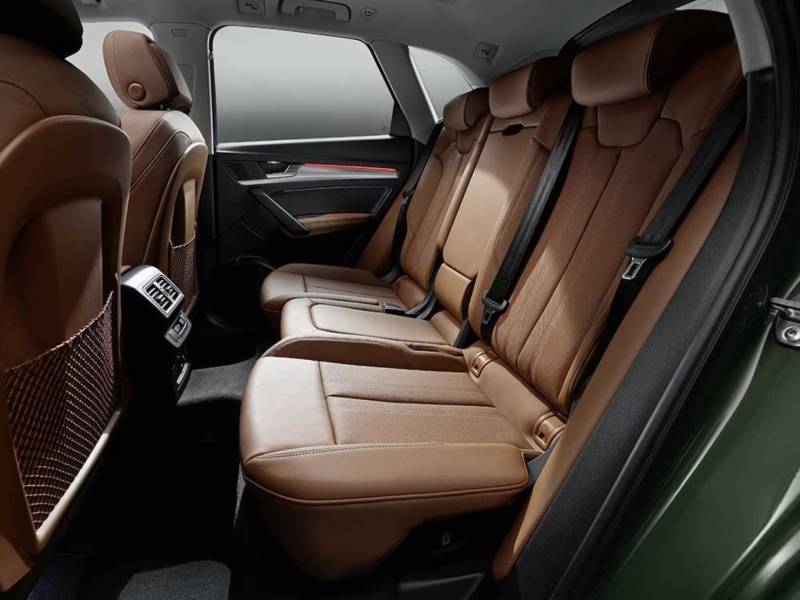 Rich sound and plenty of techs

This attention to detail sets the tone for the Vorsprung version as a whole. With features such as electric steering wheel adjustment, a 19-speaker Bang & Olufsen audio system, a head-up display, Audi Phone Box wireless handset charging and Advanced Key access with electric hands-free boot opening, it offers an exceptionally well-rounded and inclusive equipment list.

Front and rear parking sensors complemented by a reversing camera, cruise control, the Pre-sense city collision avoidance and mitigation system and hill descent control are common to all versions. 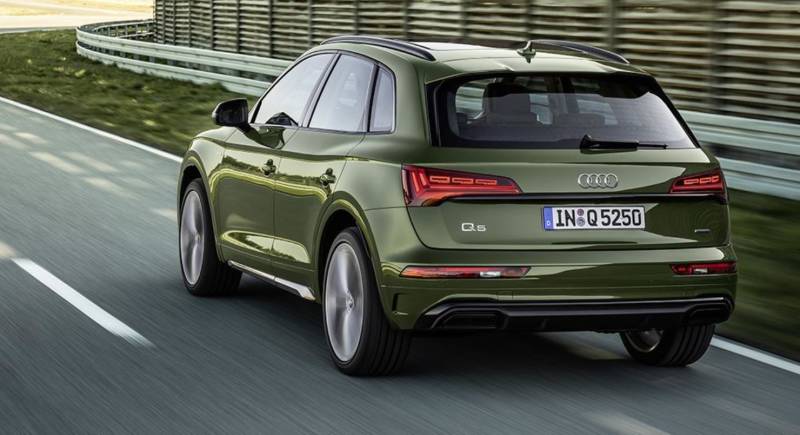 The Q5 Vorsprung supplements these with upgraded adaptive cruise control and Pre-sense systems as well as assistants to take care of everything from manoeuvring into a parking space and then reversing out again to turning at junctions, monitoring blindspots and observing motorway lane boundaries.

Its extensive list also includes the predictive efficiency assistant, which automatically adjusts the driving speed to suit the situation, the topography of the route, speed limits and road users driving ahead, helping to reduce fuel consumption by as much as ten per cent.

The long 2.82-metre wheelbase of the updated Q5 facilitates spacious interior proportions and ample luggage space accessible through the powered tailgate which is another range-wide standard feature.

With all five seats in place luggage space measures up to 550 litres, or 1,550 litres with the rear bench folded – these figures are based on the Vorsprung version with its standard sliding rear bench seat plus, which has a 40:20:40 configuration and offers a movable seat base and adjustable backrest angle in the interest of both passenger comfort and maximum load accommodation. 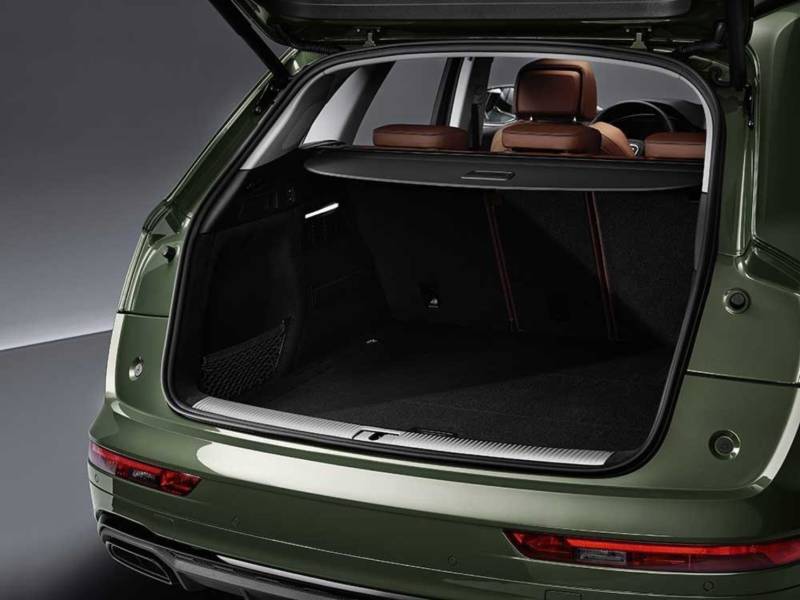 One TDI and one TFSI engine will be available for the updated Q5 in 2020. The successful Q5 TFSI e plug-in hybrid will be reinstated with a choice of two outputs, but the first wave of the newcomers will carry the 40 TDI quattro badge exclusively, meaning that they are equipped with a 2.0-litre four-cylinder diesel engine with peak power increased from 190PS to 204PS, and peak torque of 400Nm. 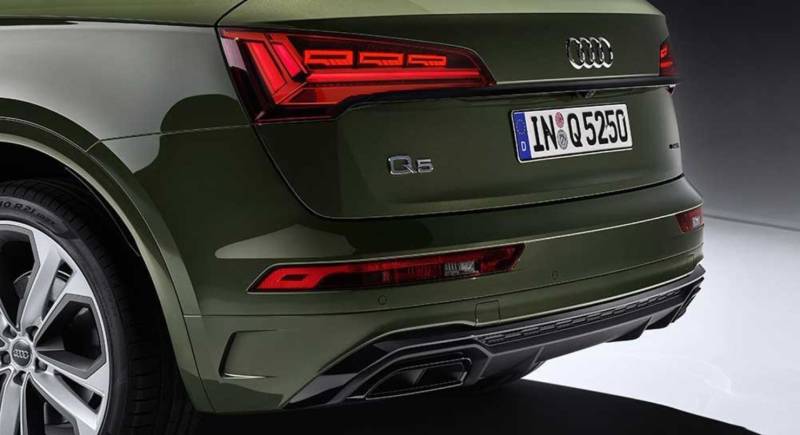 The unit’s upgraded output goes hand-in-hand with improved efficiency, which is reflected in its compliance with the requirements of the latest Euro 6d-ISC-FCM emissions standard and EU 6 A and has been achieved with the help of a new twin-dosing SCR system with dual AdBlue injection that significantly reduces nitrogen oxide emissions.

It is also now in even better shape physically - its aluminium crankcase weighs approximately 20 kilograms less than before, and around 2.5 kilograms has been pared from the weight of its crankshaft - so in conjunction with a seven-speed S tronic transmission it makes lighter work of propelling the midsize SUV to 62mph from rest in 7.6 seconds and onwards to a top speed of 137mph where conditions allow. 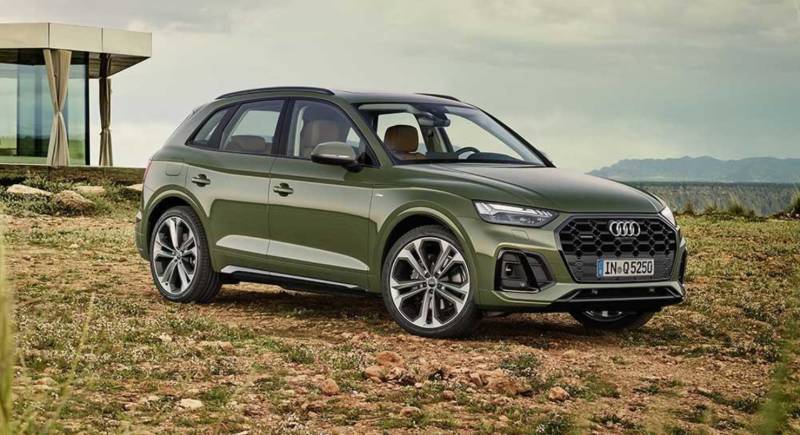 Two further supporting technologies play to the strengths of the inherently efficient TDI – a mild hybrid system (MHEV) and the latest on-demand version of quattro all-wheel-drive. Employing a belt-driven starter/generator (BSG) the MHEV system recuperates energy generated under braking and stores it in a compact lithium-ion battery within the 12-volt electrical circuitry.

It enables the Audi Q5 to coast with the engine off at speeds of up to 99mph, and initiates its start-stop function earlier, from speeds of 13mph, to give an additional boost to fuel economy. 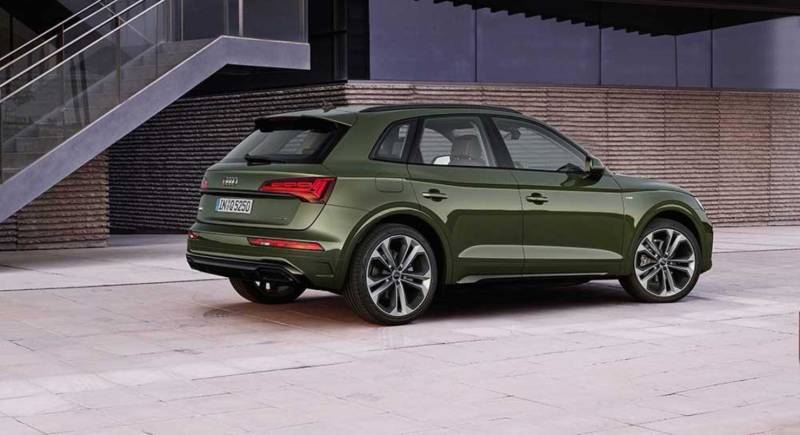 During normal everyday driving, the quattro on-demand system disengages the rear axle so that the seven-speed S tronic can direct all of the TDI’s power to the front wheels - the most efficient operating mode. If the road conditions dictate, or more is asked of the drivetrain by the driver, two clutches connect the rear wheels to the driveline in fractions of a second – in many situations, this happens predictively – meaning that economy and agility can be given equal billing.

The running gear: even more comfort and agility

The advanced quattro system works in tandem with conventionally sprung and exceptionally lightweight multilink front and rear suspension in Sport, S line and Edition One versions of the updated Q5. It features in standard form in Sport models, and as a firmer sports set-up in the S line and Edition One models. 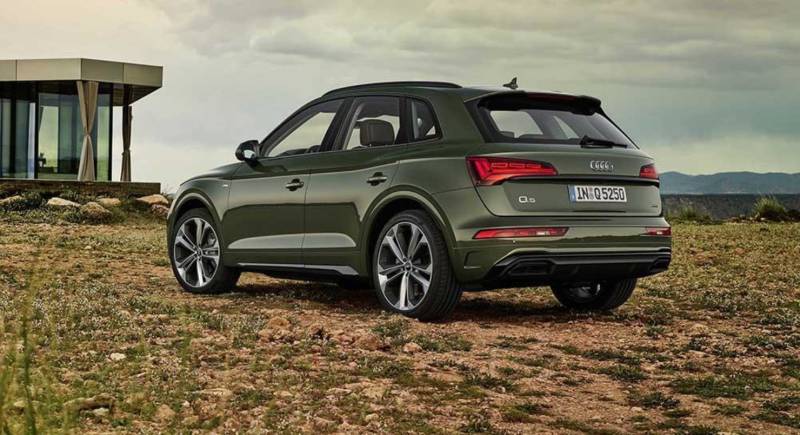 Exclusive to Vorsprung versions is an adaptive air suspension system that can vary the ground clearance of the bodyshell in five stages, which makes it an exceptionally good match for the Q5. It can be controlled by the Audi drive select handling system, which also influences the characteristics of several other technical components and forms part of the standard equipment package for all models. The driver can choose from up to seven profiles, including particularly agile offroad and all-road options where air suspension is fitted.

Call us today and get the best Q5 offers