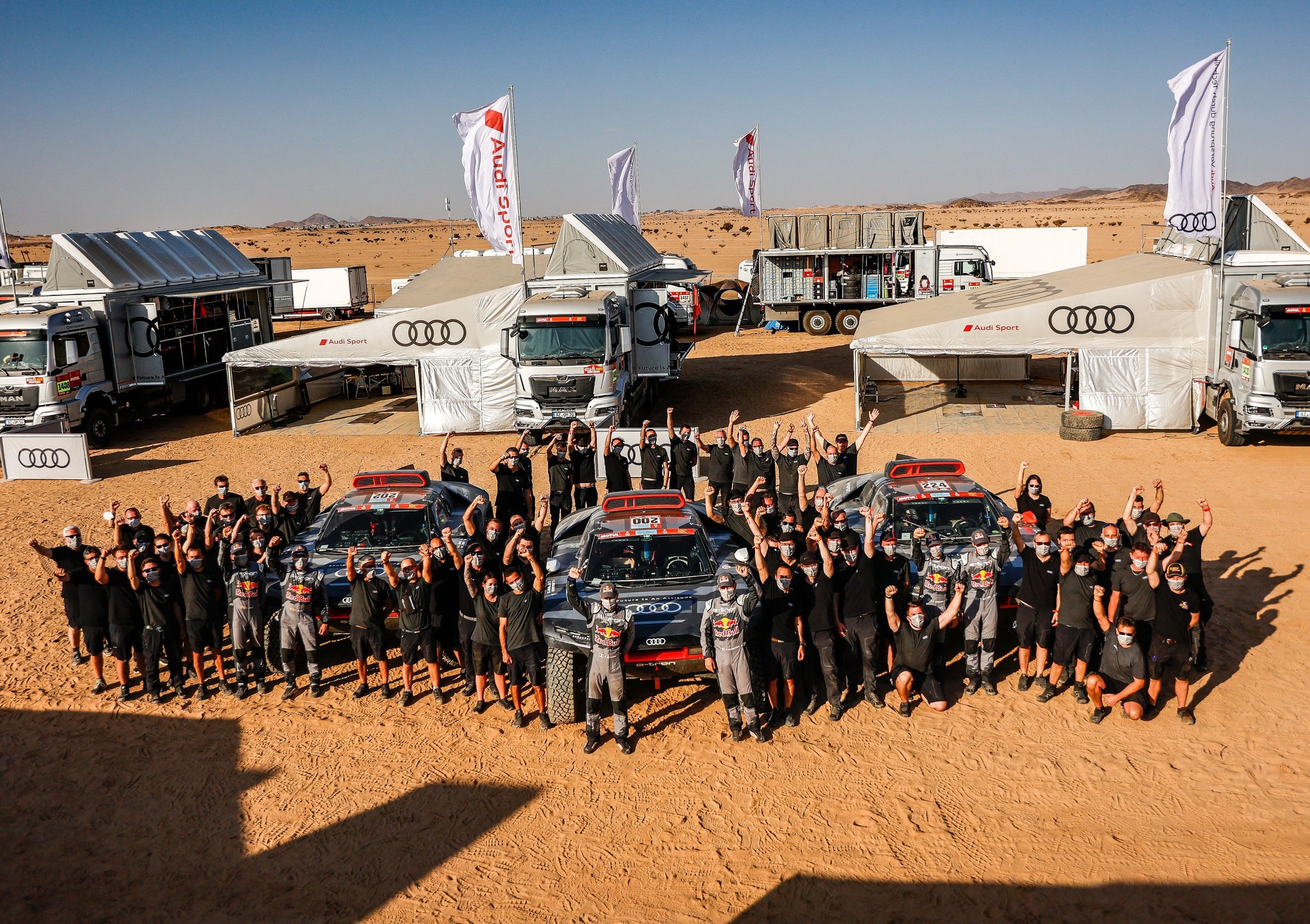 The most complex race car in Audi’s history to date passed its baptism of fire at the Dakar Rally with flying colours. All three Audi RS Q e-tron cars mastered the world’s toughest off-road rally on their debut in Saudi Arabia. In total, they covered around 24,000 desert kilometers – almost three times the 8,700 test kilometers that Audi had previously completed. Mattias Ekström/Emil Bergkvist finished ninth in Jeddah as the best Audi driver team in a demanding edition of the desert classic. With the arrival of electric mobility, Audi has ushered in a new era in off-road rallying.

“Audi has lived up to its pioneering role in the Dakar Rally right from the start,” says Oliver Hoffmann, Audi Board Member for Technical Development. “The alternative drive concept of the Audi RS Q e-tron has met all expectations with its electric drivetrain, high-voltage battery, and highly efficient energy converter. For more than four decades, our brand has repeatedly impressed with its innovations in motorsport – including in the world’s toughest rally.” Audi developed the RS Q e-tron to operational readiness in just over a year. Thanks to the highly efficient electric powertrain, the three-race cars compete in the new T1 Ultimate class for low emission vehicles. Audi’s prototypes have made history as the first representatives of this new class and achieved stage wins.

Stéphane Peterhansel, the record winner with 14 Dakar victories, summed up the enthusiasm the drive inspires: “I’ve driven many concepts in the desert but the Audi RS Q e-tron is simply sensational in the dunes. The electric drive with its good torque perfectly suits my driving style.” The Frenchman, who competed with his compatriot Edouard Boulanger, won the tenth stage with the Audi RS Q e-tron. This means he has already decided 82 Dakar stages in his favour in his career. However, early damage left last year’s winners no chance of a good overall position this time: The accomplished driver hit a stone on the second stage that destroyed the rim and caused consequential damage to the suspension. After the repair, he received a time penalty for exceeding the maximum stage time, which dropped Peterhansel to the back of the field. From this point on, the driver-crew consistently put themselves at the service of the team and helped their teammates.

Carlos Sainz benefited directly from this, for example during the repeated shock absorber changes on stages four to six. The Spaniard, navigated by his compatriot Lucas Cruz, already made history on the third stage. Sainz clinched the Audi RS Q e-tron’s first stage victory on the 2/4 demanding route from Al Artawiya to Al Qaisumah. Eight days later he managed his second stage victory. “Especially in the second half, the tracks were typical Dakar, namely very varied and demanding with a mixture of off-road tracks, small and large dunes, and difficult orientation,” said Sainz. “With our engineers, we improved the set-up of the car more and more over the course of the rally. A big thank you to everyone for that.” The successful Spaniard, a two-time World Rally Champion and with three Dakar victories under his belt, was left without a chance in the overall standings this time despite the good individual results. As early as the second day an inaccurate roadbook led to many navigation errors throughout the field. Carlos Sainz/Lucas Cruz, therefore, lost 2:22 hours and in the end finished in twelfth position.

In the same place, Mattias Ekström and co-driver Emil Bergkvist also lost 1:45 hours in their search for the right track. The two Swedes, who were only competing for the second time and in the car category for the first time, we're pleased to have made great learning progress. “My teammates gave me lots of tips,” said Ekström, a two-time DTM champion, and World Rallycross Champion. “I have found a better and better rhythm. The dunes remain my big challenge. Stéphane and Carlos have many years of experience advantage there. I always stayed on the safe side and didn’t attack too hard.” The fact that the team with the least desert experience of all achieved the best result was a nice reward for their hard work. Day after day, the Scandinavians improved from 23rd to the ninth position. With their stage 8 win and two other top three results, they proved their steady progress in a discipline where experience counts more than in other types of motorsport.

Team Audi Sport realised the preparation and successful operation in cooperation with Q-Motorsport. Sven Quandt’s squad has a Dakar experience of several decades. “I am grateful to Audi for allowing us to realise this ambitious project and to have achieved these results together right from the start,” said Sven Quandt, Managing Director, and Team Principal Q-Motorsport.

“Our driver teams won four stages and clinched a total of 14 podium results in the daily classifications. This clearly exceeds our expectations for the first Dakar participation,” says Julius Seebach, Managing Director of Audi Sport GmbH and responsible for motorsport at Audi. “A big thank you for this and respect to the team on-site, but also at home in Germany. Thanks also to Sven Quandt and his team for their valuable support. The historic victory of Carlos Sainz with the Audi RS Q e-tron as early as on the third day is the reward for this hard work and underscores the concept’s ability to win. Audi is thus the first team to achieve a stage victory with an electric drive concept. This is the result of excellent team performance. After this performance already in the first year, overall victory at the next Dakar is clearly our goal. Back in Germany, we’ll take stock, further optimise our Audi RS Q e-tron and field it in several races.”