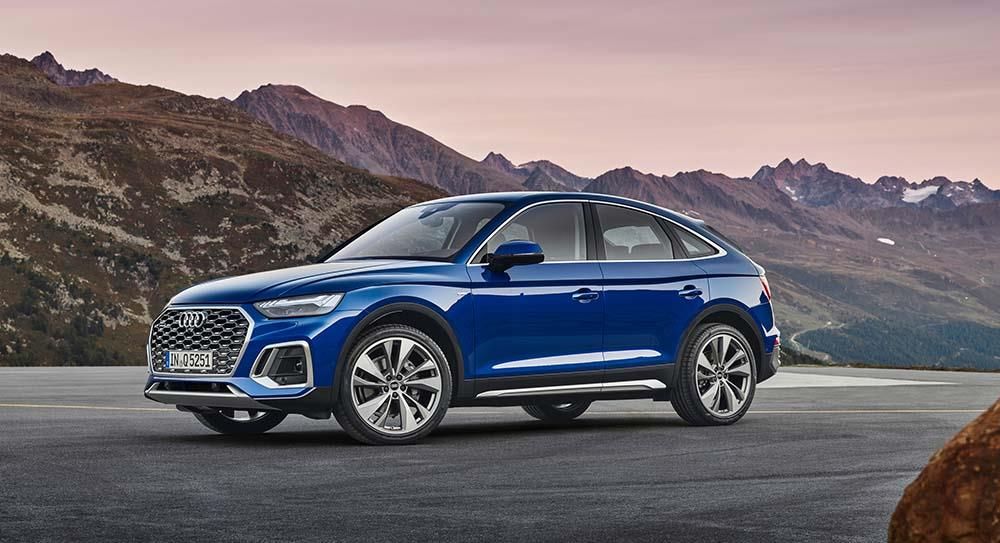 All-new Q5 Sportback: aesthetic appeal of a coupé and versatility of an SUV

All-new Q5 Sportback will arrive in the first half of 2021 in the UK, to join its sibling Q5 SUV.

The midsized Audi Q model undergoes the Sportback treatment: the aesthetic appeal of a coupé with the accommodating versatility of an SUV. The new model will appeal to customers who appreciate the innately family-friendly utility and sophisticated technology of the standard Q5, but also admire the expressive and distinctive design of more purebred sports cars.

The range will include TDI, TFSI, plug-in hybrid TFSI e and SQ5 variants.

The Sport, S line, Vorsprung and Edition One specification options will be available at launch in the UK. The digital cabin with touch-screen MMI, MMI navigation and Audi Virtual cockpit come as standard. 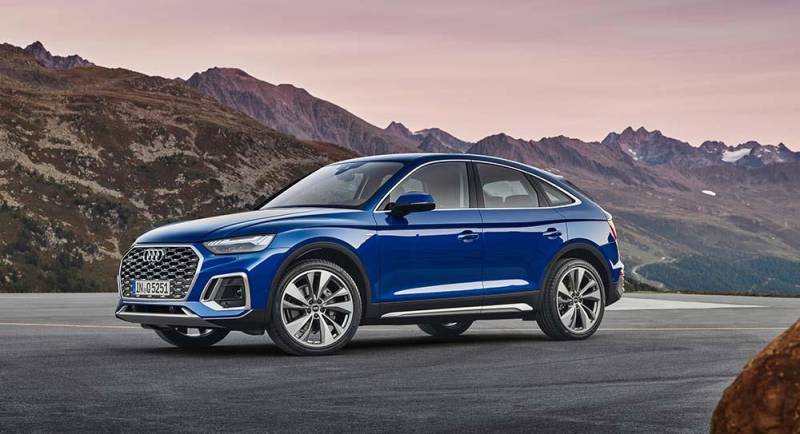 The large air inlets flank the octagonal Singleframe, and the headlights have a daytime running light signature featuring LED technology, with matrix LED units reserved for S line models and above. The continuous, elegantly sweeping shoulder line emphasises the wheels, and the side sill trim on the doors suggests resilience and solidity.

The glasshouse extends low over the body and begins its downward slope early so that the third side window tapers sharply to the rear. 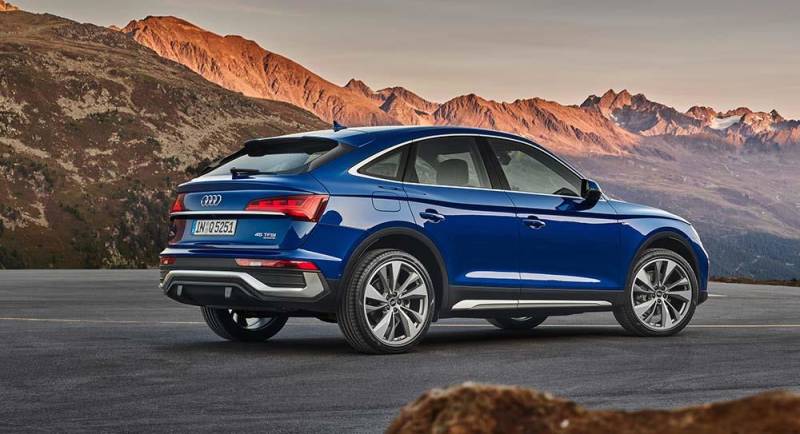 The sloping rear window and the seemingly high-mounted rear bumper give the Q5 Sportback a very dynamic and powerful appearance. This is particularly true of models equipped to S line specification and above, which combine an even more distinctive rear bumper treatment with exclusive detail enhancements to the Singleframe and side air intakes.

Vorsprung and Edition 1 versions are complemented by a black styling package, which is customary in the UK range.

At 4.69 metres in length, the Q5 Sportback is seven millimetres longer than its sister model. Its height and width are identical, but its coefficient of drag is lower at 0.30. The long wheelbase of 2.82 metres facilitates ample room for five in the cabin, the focal point of which is the cleanly styled two-section dashboard with its freestanding 10.1-inch MMI display. 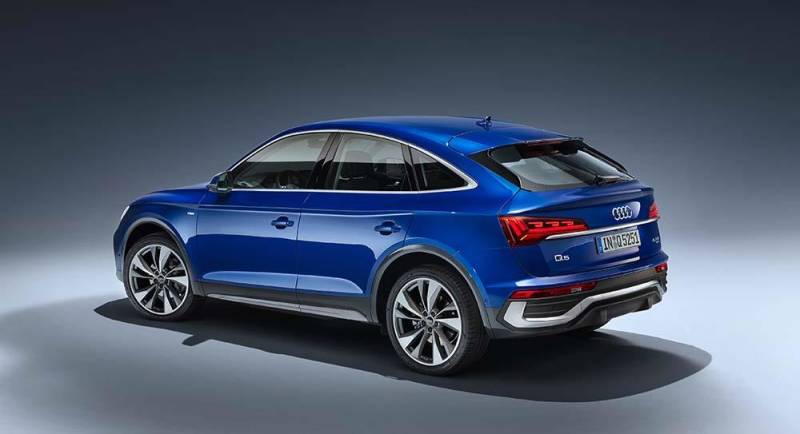 The state-of-the-art technological sophistication of the new Q5 Sportback is underscored further in Vorsprung versions by rear lights featuring innovative digital OLED technology. The units each incorporate three organic light-emitting diodes, each of which is divided into six segments that can be controlled individually and configured differently.

Customers can choose from three different rear light signatures at the point of order, all of which include a dynamic coming-and-leaving-home lighting sequence and an additional safety feature - if another vehicle approaches from the rear to within two metres of the stationary Q5 Sportback, all OLED segments illuminate as a proximity warning. 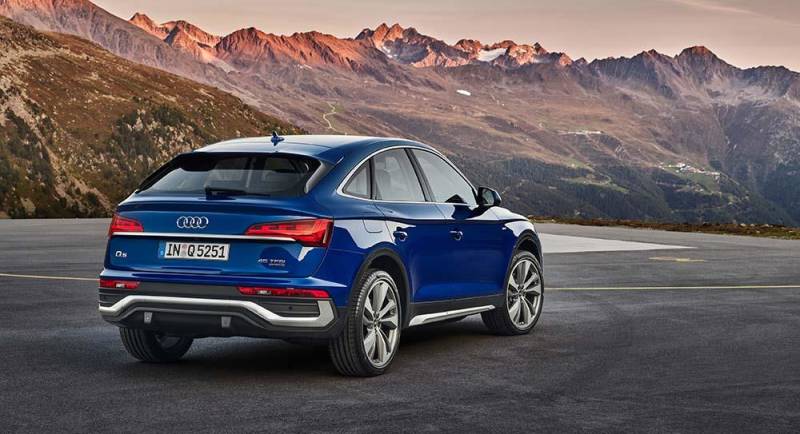 As in the recently updated Q5 SUV, incorporation of the third generation modular infotainment system or MIB 3 has rendered the rotary MMI control dial obsolete and enabled the introduction of full touch-screen functionality for the monitor, as well as a greatly enhanced natural language voice control system.

This latest system is able to access information from the cloud to inform its responses and can be activated by either pressing a button on the steering wheel or by saying ‘Hey Audi’. 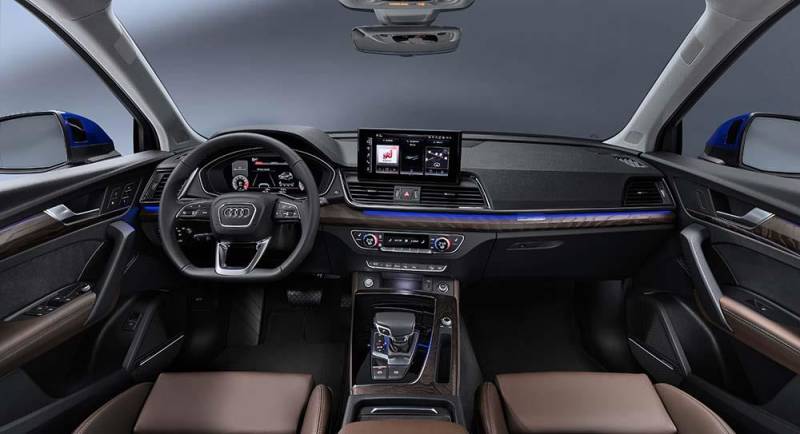 The Audi Virtual Cockpit plus with its panoramic 12.3-inch display is standard for all versions in the UK, as are MMI Navigation Plus and Audi Connect internet connectivity, meaning that when guiding the driver the Q5 Sportback can display high-resolution satellite images from Google Earth and use the swarm intelligence of the Audi fleet to deliver lane-by-lane information on traffic flow and traffic forecasts in real-time, as well as providing alerts for upcoming hazards such as slippery roads and fog.

Useful resources such as a news feed, weather and travel updates, local fuel pricing listings and an on-street parking assistant that gauges the likelihood of finding a space at a given location also form part of the Audi connect package. 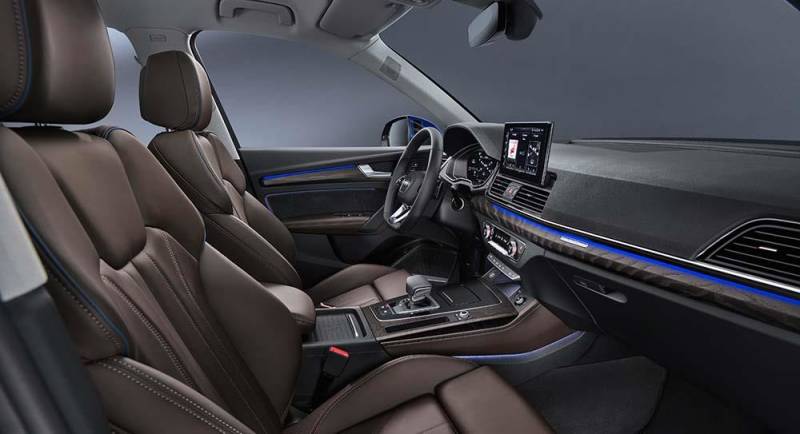 Vorsprung versions raise the bar even further technologically, adding features such as a 19-speaker Bang & Olufsen audio system, a head-up display, Audi Phone Box wireless handset charging and a host of advanced driver assistance upgrades covering everything from manoeuvring into a parking space and then reversing out again to turning at junctions, monitoring blindspots and observing motorway lane boundaries.

A step up from the standard cruise control to adaptive cruise assist is also included, allowing the Q5 Sportback to largely take over the tasks of accelerating, decelerating and steering within the limits of what is currently legally permissible. Its presence also helps another high-tech Vorsprung highlight - the predictive efficiency assistant - to automatically adjust the driving speed to suit the situation, the topography of the route, speed limits and road users up ahead, helping to reduce fuel consumption by as much as ten per cent.

The standard powered tailgate glides upwards to reveal a luggage compartment with a volume of 510 litres, which increases to 1,480 litres when the rear seats are folded down. Vorsprung versions offer increased variability thanks to their sliding rear bench seat plus, which has a 40:20:40 configuration and offers a movable seat base and adjustable backrest angle, liberating extra space for passengers or luggage as required. When its base is positioned as far forwards as possible luggage capacity can be increased by as much as 60 litres to a maximum of 570 litres. The optional storage and luggage compartment package keeps things orderly and holds luggage securely. 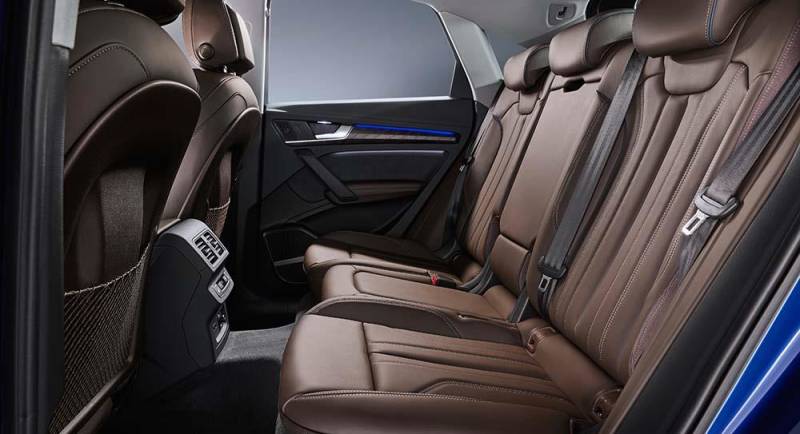 The engine lineup: one TDI and two TFSI units

The Q5 Sportback is set to launch in the UK with two powerful 2.0-litre four-cylinder engines – a TDI and a TFSI – each with 204PS and therefore identifiable by 40 TDI and 40 TFSI designations. The potent SQ5 Sportback with its 347PS twin-turbo V6 TDI will also form part of the first wave. Plug-in hybrid TFSIe variants with a choice of two outputs will follow on a later date.

The four-cylinder engines are combined with a seven-speed S tronic dual-clutch transmission, while the V6 TDI in the SQ5 Sportback works with an eight-speed Tiptronic. All versions are shored up by quattro all-wheel-drive, with some featuring an on-demand system that can disengage the rear axle in everyday driving conditions for maximum efficiency, and reconnect it predictively within fractions of a second when required. 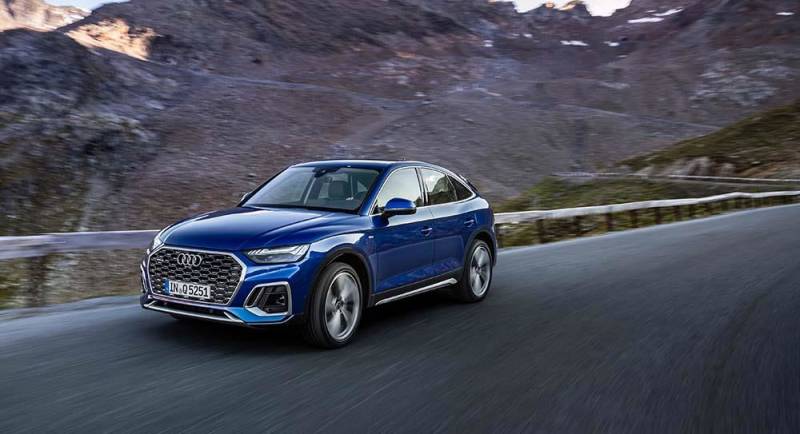 To further boost the economy a mild hybrid system employing a belt alternator starter also stores electrical energy generated during braking in a lithium-ion battery. With its help the Q5 Sportback and SQ5 Sportback can coast with the engine idling or completely shut down, and are able to more fully reap the benefit of start-stop technology by disengaging their engines during deceleration at a higher speed of 13mph and below while also restarting impressively smoothly.

The 2.0 TDI in the Q5 Sportback 40 TDI quattro is not only efficient but also particularly clean. It meets the limits of the latest emissions regulation Euro 6d-ISC-FCM or EU 6 AP.

Thanks to a twin-dosing SCR system with double AdBlue injection, nitrogen oxide emissions are further reduced as appropriate for the respective operating situation. The urea solution is injected into each of two SCR catalytic converters arranged one behind the other in the exhaust system: one close to the exhaust manifold and one farther away from the engine in the exhaust system. 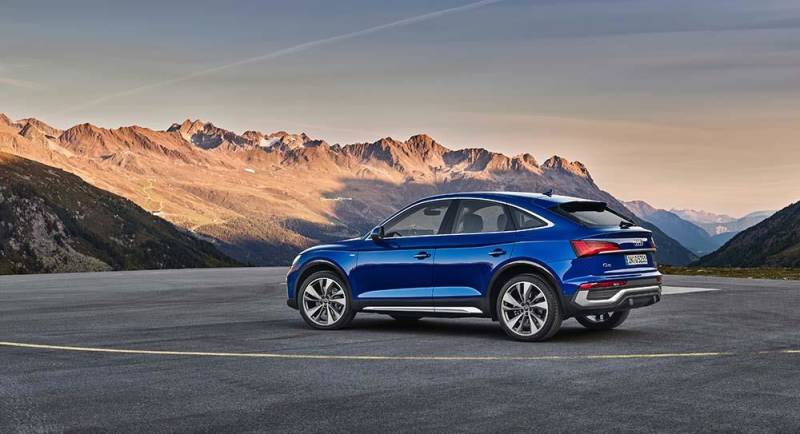 Comfort for the long haul is assured in all versions of the new Q5 Sportback thanks to its exceptionally lightweight multilink front and rear suspension, which from S line-level upwards has a tauter sport tuning. 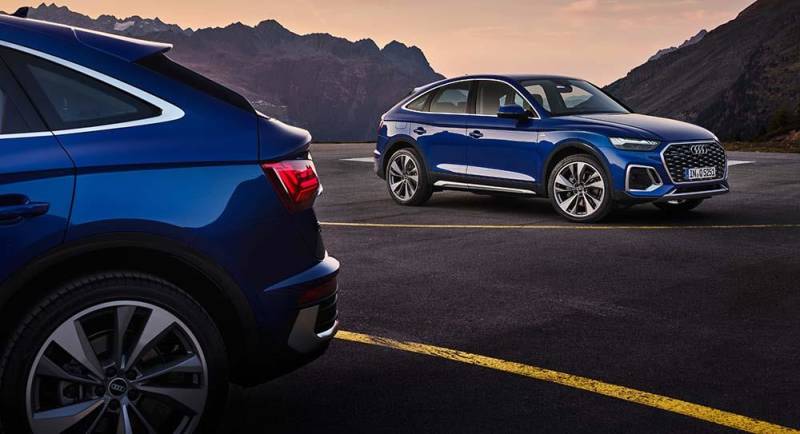 A set-up with adaptive damper control is also available for even keener tracking of the road surface, while an adaptive air suspension system can vary the ride height of the bodyshell in five stages and by up to 60 millimetres features in Q5 Sportback Vorsprung models.

The SQ5 Sportback and SQ5 Sportback Vorsprung are equipped with an S-specific version of this versatile system, which can even make loading easier by lowering the rear axle individually by 55 millimetres at the touch of a button in the luggage compartment. 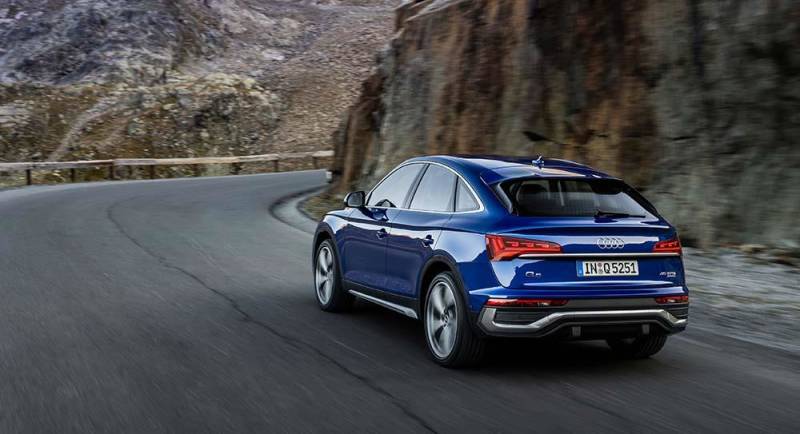